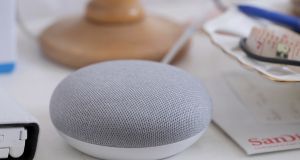 IDC said sales of smart speakers in Europe reached a record 7.5 million units shipped in the fourth quarter of 2018

The Republic will soon have more homes with smart speakers than without, according to a new forecast.

Research undertaken by Strategy Analystics indicates the State is one of eight countries that will reach the 50 per cent adoption threshold within the next four years, along with the UK, Canada, South Korea, Australia, Germany and France.

The research company expects the Republic to surpass 50 per cent penetration rate in the second quarter of 2023. This places it behind the US, which is expected to be the first country in the world to reach the target in late 2020, and the UK, which will likely get there a year later.

The forecast comes as another research company, Canalys, predicts that the total number of smart speakers in circulation globally will top 200 million by the end of this year .

Moreover, it expects smart speaker ownership will overtake that of tablets by 2021, when more than 500 million devices from companies including Amazon, Apple and Google, likely to be in people’s homes.

The US is expected to maintain its lead in terms of adoption, accounting for 42.2 per cent of all smart speakers in circulation, while Canalys also predicts huge growth in China, where currently none of the big players have yet to make an impact.

China’s smart speaker installed base is forecast to reach 59 million by the end of 2019, up 166 per cent versus the 22.5 million in circulation last year.

Another new forecast from IDC indicates huge growth in adoption of smart speakers in Europe with a record 7.5 million units shipped in the fourth quarter.

According to the research company, 33 million units were sold in Europe last year, representing a 15.1 per cent rise versus 2017.

“The adoption of smart speakers will continue to expand rapidly, as purchases are no longer driven by curiosity or impulse buying, but by the increasing presence of several speakers in the household,” Antonio Arantes said, IDC’s senior research analyst for smart home devices in western Europe.

The company recently forecast that shipments of “smart home devices” - a category that includes smart speakers like Amazon’s Echo, but also home-security, lighting, smart thermostats and video-streaming gadgets, will total 144.3 million this year, rising to 240.1 million by 2023.

Smart speakers represented 22.9 per cent of the smart home market in the last quarter of 2018. Amazon was the biggest winner, with 59.8 per cent market share in the segment, while Google came second with 30.7 per cent.

IDC predicted that Google Assistant will likely surpass Alexa in 2022 as the number one smart speaker system in Europe, reaching 18.5 million units.