Apple’s latest plans should worry us all 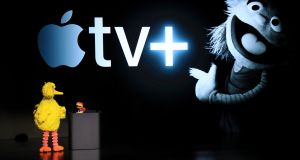 Big Bird speaks during an Apple launch event at the Steve Jobs Theatre in the Apple Park in California, the US. Photograph: Jim Wilson/The New York Times

The signature look for an Apple Store, whether in Palo Alto, New York or London, is a variation on the theme of a floor-to-ceiling glass box through which customers can be watched as they browse and interact with the Apple products.

Perhaps a different corporate visual metaphor than one encapsulating exposed scrutiny would now be a wiser design choice.

Apple’s planned movement into broad new market areas, announced on Monday, and made ever so acceptable by a gushing lineup of A-list celebrities such as Oprah and Steven Spielberg, reveals the company as yet another tech monolith aiming to be our interface point with life.

Apple’s new market-expansion ventures this week – games, television and news subscriptions and a credit card – will bring it further into the same controlling space Amazon, Facebook and Google are staking out, where consumers increasingly cede parts of their lives that had remained disparate and uncollated into a single corporate activity and data silo.

They will see more points at which consumers enter the Apple ecosystem, and more opportunities for scrutiny, analysis, and further market expansions.

All this is done in the name of access and convenience for consumers, but this masks the effects on consumer autonomy and privacy, as well as the further distancing of the producers of content from the people who consume it, making it more difficult for people or a multitude of businesses to exist independently of tech company control.

This plan to place more people and more product and service interactions inside the glass box presided over by Apple should worry us all.

While some commentators noted that Apple would be the privacy champion amongst its big tech rivals, that’s only because Apple still manages to get away with presenting itself as tech’s privacy and data collection good guy.

On the plus side – at least so far – that data-respecting version of Apple is what we see in North America and Europe, where chief executive Tim Cook has made a point of contrasting how Apple gathers and manages user data with what rivals such as Facebook, Google and Amazon do. And the company is to be lauded on that point.

No doubt this perception will be used as a major selling point for Apple’s services as it rolls them out, whatever they may ultimately be, on a timeline that we still mostly don’t know, because details were so thin on the ground at the big launch event.

However, if you are in a market where a well-developed surveillance state maintains tight control on its population, and the state decides to link access to their market with ceding storage of user data to a state-run company, well, hey: Apple is cool with that. They did just that last year in China.

This so alarmed press advocacy group Reporters Without Borders that they urged journalists who were China-based iCloud users to either change the country associated with their account (which non-Chinese residents can do) or to get off Apple and iCloud.

Apple’s compliance with Chinese state demands was criticised by many human rights and privacy advocacy groups, including Human Rights Watch and Amnesty International.

Apple’s willingness to compromise elsewhere signals clearly that it does not draw any hard-and-fast privacy line in the sand and is a sharp reminder that its stronger privacy stance in some markets hinges on corporate whim. What Apple does today may not be what Apple does tomorrow.

Which brings us back to the real concern here. Slowly, bit by literal bit, we are handing over elements of our lives that range from banking to entertainment, communication to household management, travel to personal health, media control to advertising – and all the sweeping, sensitive data gathering that that involves, exposing us at the most intimate level – to five companies: Amazon, Apple, Google, Facebook, Microsoft.

As tech companies, all come under less regulation than do companies in many of the sectors they have moved into. Much of what they do, as well as how they do it, and why, remains veiled because oversight lags behind their activities and their technologies.

We also fail to see how bizarre it is for, say, Apple to offer a credit card because tech company (over)reach is now normalised.

Imagine if, say, Mastercard or McDonald’s mediated our online searches, the ads we see, and our household thermostats, tracked where we go each day on maps and mobiles, gathered data from our apps, machine-read our emails, and recorded what programmes we watched and music we listened to.

All this is just part of some of the daily intake across the Big Five.

Instead, we are directed: Look over there! Toward what Spielberg might produce for a streaming service! Or to 3D augmented reality incorporated into maps! Or to ordering pizza by talking to Alexa!

We, our governments and our regulators need to start paying more attention to the activities of the ringmasters rather than their distracting acts.