Samsung Galaxy S8 Plus – the Android phone you need

Review: Samsung shakes off Note 7 disaster with this feature-packed handset 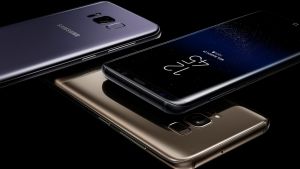 If there is one thing that you can say about the Samsung Galaxy S8 Plus, it’s that it has screen to spare. The S8 Plus is the bigger version of Samsung’s latest flagship smartphone, the one that the South Korean firm badly needs to be a success to erase the painful memories of the Note 7 disaster.

The good news is that the S8 Plus is not only a solid addition to the Galaxy line, it’s also a well-designed and powerful phone.

First, the essentials. The S8 Plus comes with 64GB of storage on board, expandable with a memory card up to 256GB, and 4GB of RAM. Powered by an octa-core chip, the phone is water- and dust-resistant, rated at IP68, so it will take some abuse, but you might not want to risk that, given that it would take some of the shine of your sparkly new toy.

The key selling point, though, is the screen. The “infinity display” measures 6.2in – including the rounded edges of the screen – and, as is the norm for Samsung’s high-end phones, is Super Amoled. But despite the raw figures, the S8 Plus doesn’t feel that big. That’s because Samsung, rather than try to add on extra screen, has actually just shrunk the bezel to minute proportions to squeeze more screen space out of the phone. To put it in context, it’s is marginally taller than the iPhone 7 Plus, a few millimetres shy of it in width and slightly thicker. It’s also lighter than its Apple rival, and has a bigger screen. Overall, it’s not a bad trade-off.

Say goodbye to the physical home button; like Apple, Samsung has gone for the touch-sensitive button, but, unlike Apple’s button, it is part of the of the display. That’s something we expect to see in the latest version of Apple’s smartphone, which is reportedly set to be announced in September. The good news is that Samsung has opted to keep the headphone jack intact, so you won’t have to start looking for some decent Bluetooth headphones. It is a USB C charger, but then most of the higher-end phones are shifting that way too, so Samsung isn’t alone.

The camera on the rear is 12 megapixels, with an 8-megapixel front-facing camera for selfies and the like. The S7 had a great camera, a trend that the S8 continues, supporting 4K video and some decent low-light performance thanks to the wide aperture of f1.7.

Bixby, Samsung’s smart assistant, is a little limited. Although Bixby Vision is up and running, which allows you to do everything from translate text to find out more about products, the voice assistant part isn’t available in English yet. So the dedicated Bixby button on the side is little use right now.

Samsung has taken everything that the S7 did well and built on it for the S8 Plus. That extra bit of screen space makes a difference for browsing web pages or reading documents in your email. And if there is one thing that Samsung does well, it’s screens. The screen on the S8 Plus is top quality and, with Gorilla Glass 5 front and back, it’s well protected.

The positioning of the fingerprint sensor makes it more difficult to access, especially if you are more at the stumpy end of the finger scale. You’ll find the same issue with reaching the top of the display, although the one-handed display feature will help.

The S8 Plus is crammed with features, from an excellent camera with optical image stabilisation on the video camera to multiframe image processing that brings up better images in harsher lighting conditions. And if you are a fan of mobile VR, the S8 Plus is the phone for you, thanks to its Quad HD capabilities. Wireless and fast charging is also included in the S8.

Prepare for phone envy. Don’t say we didn’t warn you.