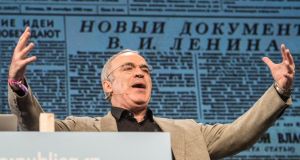 In the old Soviet Union, news – which might or might not be true – came through just two outlets: Pravda and Channel 1.

“But now, there’s one truth and a gazillion ways to lie,” said former world chess champion Garry Kasparov, referring to the way in which the internet is being used to spread “fake news” and disinformation.

Speaking on the first day of the Re:publica digital culture festival in Berlin, Kasparov – chairman of the Human Rights Foundation and “security ambassador” for security firm Avast – said Russia was now taking online activities long used to influence Russian politics and elections to the rest of the world. Flooding the internet with many fake news stories creates confusion and fatigue.

“What was important was that they created a mass block of information that made many people unaware of the truth.”

He said that if tweets and Facebook posts by automated “bot” and troll accounts from the US presidential election were examined, it was possible to see “how lines were adopted in Russia, then translated into English in the US. But all these accounts went back to just one master.”

Accounts that were supposedly from American Trump supporters also supported Brexit, he said, which could be reasonable. But he questioned whether the average American Trump voter would also tweet support for Bashar al-Assad and Marine Le Pen as well.

Asked whether he believed it was possible that huge “troll armies” were hired to make fake news tweets and posts, Kasparov said to look at the ratio of investment and return. Even if hired internet trolls were paid $5 a tweet “it was cheaper than TV ads”.

He added: “This is the way they turn debate into a clown show, because it’s much easier to destroy [than debate]. And many people, many good people see it and walk away” from important online debate.

He argued that Russian president Vladimir Putin has no ideology except a desire to remain in power.

“Putin doesn’t sell any ideology. He’s looking for any fringe groups that can help his agenda. That’s why he can go equally for left or for right, anything that attacks the European Union or Nato – that’s why he’s comfortable with Nigel Farage or Jeremy Corbyn. ”

But he also said that Putin was inherently weak.

“Putin knows how to weaponise refugees, he knows how to weaponise the press, but he doesn’t have the same amount of power as Stalin in 1948,” he said. His bluff could be called by showing the weakness of his position. A new generation of young Russians were questioning what they were told by the state, he said.

He also noted the hypocrisy of many technology corporations that in their home countries speak out strongly in defence of an open internet and protecting privacy but then comply with the surveillance demands of a state such as Russia.

“I feel uncomfortable when people compare Putin and other dictators with players of chess. Chess is a very transparent game,” he said. “Dictators don’t operate in transparency. It’s a simple, practical game of survival.”

He said people would increasingly turn against being manipulated by machine and network-driven campaigns full of false information.

“Machines give us no choice but to fight our own complacency,” he said.

1 Opioid executive admits to ‘no morals’ ahead of prison term
2 Who are Ireland’s 17 billionaires?
3 Farmer seeks to challenge €3.6bn Intel plan in High Court
4 Fallon & Byrne founders McHugh and Byrne exit group
5 Are there annual limits on inheritances or gifts to a child?
Real news has value SUBSCRIBE