The Note 8 includes a larger 6.3in infinity display and dual rear cameras 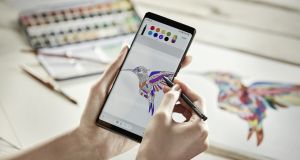 The Samsung Galaxy Note 8 smartphone, the first Note device since its 2016 model was recalled and discontinued over safety concerns.

Nearly a year after Samsung was forced to discontinue the Galaxy Note 7 amid safety concerns, the mobile maker is back with a new model.

The Note 8, which is available for pre-order from Wednesday, will be released in Ireland on September 15th. It comes with a large 6.3 in “infinity display”, which was first introduced on the Galaxy S8 and 8Plus earlier this year.

The display hides the home button and pushes the screen out to the edges of the devices, giving users more viewing room.

The Galaxy Note8 comes with two 12MP rear cameras with optical image stabilisation (OIS) on both the wide-angle and telephoto lenses. A new “live focus” feature enables users to change the focus of an image before and after they’ve taken it.

The S Pen, a stylus that slots into the Note 8, has been redesigned with a finer tip and improved pressure sensitivity to feel more like a real pen. Both it and the smartphone itself are water and dust resistant.

The phone comes with an eight megapixel front-facing camera, as well as fingerprint, facial and iris scanners for biometric security. Smart virtual assistant Bixby will also be included and there is an always on display allows users to check notifications without unlocking their phone.

Samsung confirmed the Note 8 will be initially available in two colours, Midnight Black and Maple Gold. One other colour – Deepsea Blue – will be forthcoming.

The Note series first appeared in 2011. The Note 7 had to be discontinued last year due to an issue with exploding batteries. The recall cost Samsung more than $5 billion.

The release of the new device comes shortly before Apple is due to mark the 10th anniversary of the iPhone with the next generation of the smartphone.