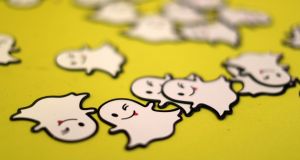 Snapchat is under pressure to prove it can compete with Facebook and its two billion monthly users for advertising dollars.

Facebook is at risk of losing its grip on young American users to Snapchat, new figures show, as analysts predict the world’s largest social network will soon see its first ever decline in usage among any age group.

Research group eMarketer warned on Monday that a new generation of social media users may never join Facebook as it predicts that users aged 12-17 will fall 3.4 per cent to 14.5 million this year, below the 15.8 million teenagers who use Snapchat.

Snapchat has also overtaken Facebook in the coveted 13-24 age group based on one specific metric used by advertisers to make ad-buying decisions. Facebook’s “daily ad reach” is 25 million-26 million, according to figures shown on its ad-buying portal, while Snap’s equivalent exceeds 26 million, the Los Angeles-based company has told advertisers according to two people familiar with the data.

Although the gap is narrow, Snapchat’s ability to reach more 13- to 24-year-olds on a single day could be an advantage for advertisers such as movie studios and retailers conducting flash sales, agency executives say.

Snap’s shares have come under sustained pressure in recent months, as investors worry about its growth prospects. However, taken together, these data suggest that Facebook’s repeated copying of Snapchat features – such as selfie masks and 24-hour “stories” – has not had a significant impact on young users’ loyalty. Snap reported earlier this month that it saw a 33 per cent increase in time spent on its app among under-25s compared with six months ago.

“The good news [for Snap] is that Snapchat is continuing to grow,” said Debra Aho Williamson, analyst at eMarketer. “The bad news is that Facebook is very large and powerful, so Snapchat is still going to exist somewhat in their shadow.”

Even as younger users log in less frequently and spend less time on Facebook, the Silicon Valley company’s ownership of Instagram has helped it retain teenage users, eMarketer said.

While Snapchat is also expected to have more 18- to 24-year-old users than Facebook – Snap’s 24.4 million compares favourably with its larger rival’s 23.5 million this year – Instagram is also a significant player, with 22.1 million users in the age bracket, according to eMarketer.

“For teens and increasingly for young adults, Snapchat is a very, very sticky platform, and one that they turn to again and again over the course of a day,” said Ms Aho Williamson. “They also like that Snapchat is a bit hard for older folks to figure out. It’s kind of their little place where they don’t feel like they have to be on display and they can be their true selves because they are talking to their friends.”

Snapchat is under pressure to prove it can compete with Facebook and its two billion monthly users for advertising dollars. Investors have remained excited about Facebook – pushing the stock up 36 per cent so far this year – as it beat expectations on earnings and revenue.

However, the prospect that it could lose the attention of teenagers, lured by newer apps and deterred by their parents’ presence on the network, has worried shareholders in the past.

The shift of teens’ loyalty from Facebook to Snapchat has been “building every year”, said Ms Aho Williamson. “This year we finally felt comfortable saying, yes, this phenomenon is going on.”

1 Michael Smurfit: ‘I asked Trump to invite me to the White House for my 80th birthday’
2 Small businesses are cannon fodder in zealous anti-virus experiment
3 ‘I’m so lucky to be in the Caribbean – a million miles from Derry Girls’
4 Ryanair expects air fares to fall when flights take off again
5 Tax and the Pandemic Unemployment Payment: Your questions answered
Real news has value SUBSCRIBE