Dark web poses dilemma of protecting both neo-Nazis and dissidents 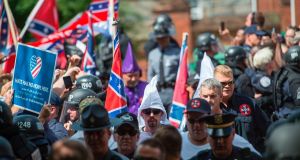 The neo-Nazi website Daily Stormer finally crossed a line following the killing of a civil rights activist at a white supremacist rally it helped organise in Charlottesville, Virginia: a blog post attacking victim Heather Heyer led to it being chased from the web, first by technology companies who steadily refused to provide service, then by hackers who tried to crash the site.

Eventually, it sought refuge in the so-called dark web, launching a special type of site called a Tor hidden service, impervious to conventional internet censorship. In doing so it shone a spotlight, yet again, on a controversial technology that provides protection for dissidents in oppressive regimes at the same time as harbouring Nazis, illicit marketplaces and child abuse rings.

The developer of the protocol that allows sites to exist hidden within the dark web and the encrypted browser used to connect to them and normal websites in a protected fashion, the Tor Project, spoke out shortly after the Daily Stormer created its hidden service: “We are disgusted, angered and appalled by everything these racists stand for and do. We feel this way any time the Tor network and software are used for vile purposes.”

But, unlike previous groups the site had turned to for protection, Tor argued the same rights that protect the good protect the Daily Stormer too. “We can’t build free and open source tools that protect journalists, human rights activists and ordinary people around the world if we also control who uses those tools,” it said.

“Tor is designed to defend human rights and privacy by preventing anyone from censoring things, even us.” The project is unable to deny service to the Daily Stormer even if it wanted to.

It isn’t the first time Tor has found itself facing controversy. The software was initially developed with the help of US government funding to provide access to the open web to users from repressive nations, but has become better known in the West for its use by those who want to evade law enforcement.

Perhaps the most notable examples are dark markets, such as the Silk Road, AlphaBay or Hansa – all now closed down by authorities. These used Tor hidden services to connect customers with merchants, overwhelmingly for illegal goods such as drugs, fake IDs and similar, and cryptocurrencies such as bitcoin to facilitate payments.

But Tor has been used for other malicious ends as well. Over the years, law-enforcement agencies have discovered and taken down sites that trade in child abuse imagery and others that offer illegal hacking services on the dark web. Terrorists have also been experimenting with the service, although the surprisingly low-tech approach of many would-be murderers reportedly puts them off such secure solutions.

One 2015 survey of the dark web put the proportion of illicit content at about 40 per cent.

Such figures have led nations such as France to wonder if banning the service might be a possibility, but proponents say the 60 per cent of sites that are perfectly legitimate are important to defend.

“Facebook has a Tor instance for people in repressive regimes,” says Cindy Cohn, the executive director US e-rights campaign group EFF. “We see Tor use go up whenever a dictatorship takes over or a coup occurs. Tibetans, United Arab Emirates, Tunisia, Egypt. The list goes on and on.”

Perhaps the most important use of Tor, for many of its users, is simply allowing access to the open web in a protected and private manner. The system works by bouncing a request through at least three relays, with each knowing only the positions next to it in the chain: the entry node knows who is asking for a connection, but not where for; the exit node knows what the connection is to but not who wants it; and the middle node only knows to connect the other two.

In nations where conventional access to the net is curtailed, Tor can be a lifeline for those trying to bypass censorship, acting as a virtual private network (VPN) on steroids. In 2005, for instance, a guide to using Tor, translated into Arabic and distributed in Mauritania, was credited with forcing the government to abandon web filtering wholesale. Nasser Weddady, who translated the guide, told the MIT technology review that it didn’t even matter if the officials didn’t know what Tor was: “They noticed that our communications were not disrupted, so the filtering was useless.”

Elsewhere, however, the success of Tor has been a double-edged sword. China, perhaps the country with the most infamous web censorship regime in the world, began working to block the service in earnest in 2012. It is possible to bypass for those with resources and desire, but for many Chinese citizens, simply purchasing commercial access to a VPN rapidly became preferable. Now that China has renewed its ban against commercial VPNs, however, Tor may have another moment in the sun for the most populous nation on Earth.

Alec Muffett is a former Facebook engineer, now working for Deliveroo, who built the social network’s entry point on to the dark web. “This is not about Tor,” he says. “This is about whether we want to permit people to have secure, robust, DDOS-resistant, highly-available communication mechanisms which are not referent to some central authority, ie without someone being able to shut them down.

“All the qualities I cite above are ones which would be highly desirable in enterprise contexts. So: the ‘dark web’, far from how it is usually painted, is in this case merely providing the manner of security and robustness which costs other organisations considerable amounts of money.”

The US government continues to fund the project, paying a total of $1.2 million (€1 million) in 2015, the last year for which records are available. It also funds attempts to break it, with the department of defence bankrolling an academic study into weaknesses in the network from 2014 onwards.

The Tor Project wasted no energy defending the Daily Stormer: “Ironically, the Tor software has been designed and written by a diverse team including people of many religions, races, gender identities, sexual orientations and points on the (legitimate, non-Nazi) political spectrum. We are everything they claim to despise. And we work every day to defend the human rights they oppose.

“Cars and phones are also used for vile purposes, but that doesn’t mean cars and phones are bad,” a spokeswoman said. “Same with Tor. Tor was developed to protect people, and that’s why most people use it, including journalists, human-rights advocates, lawyers, researchers, marginalised groups and privacy conscious individuals.”

For Muffett, the argument is one he feels is on the way out. “The ‘free speech, but ?’ community are starting to see that the same could be applicable to them in future.”

The rise of neofascism may strengthen the incentive to fight hate speech, but it also reminds many of the value of free speech for all, when confronted by those who would destroy it. – (Guardian News and Media 2017)