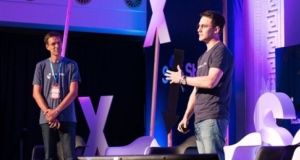 Speakers at the inaugural SaaStock conference in Dublin last year.

As the holiday season ends so the tech conferences begin again. A number of technology-related events are happening in Dublin in the coming months with SaaStock, UXDX and Uprise among them.

The inaugural event, aimed at early-stage to growth-stage business-to-business Saas founders and investors, attracted more than 700 people to the RDS with the organisers looking to grow attendee numbers to 1,500 this year.

Senior speakers from Sky, Slack, Asos and Microsoft will all be appearing at UXDX, which takes place in the RDS on during the first weekend of October.

It is an IT product-management conference aiming to help start-ups and large enterprises build better products more quickly. Last year, the event attracted almost 500 designers, developers, product managers, chief technology officers and and chief executives. This year it expects to have almost 1,000 attendees.

Also making a return to Dublin is Uprise, which takes place at the RDS in late October. The event is the brainchild of Amsterdam-based Irishman Paul O’Connell, who founded the festival in Holland two years ago before expanding it to Ireland in 2016.

Now in its seventh year, the European Cyber Threat Summit returns to the Helix, DCU, in October while data conference Predictis on at the RDS with speakers from Zendesk, CeADAR and Grid Finance all confirmed.

Lastly, more than 600 marketers from around the world will descend upon the Mansion House Dublin on November 1st for Learn Inbound, an annual conference focused on digital marketing. It promises to bring the brightest minds in digital marketing together to share tips, tactics and strategies in search-engine optimisation (SEO), pay per click (PPC), conversion rate optimisation (CRO), analytics, PR, content marketing and growth.

Lest we be accused of being Dublin-centric, NodeConf EU, which is considered the key Node.js event in Europe, is on at Lyrath Estate, Kilkenny in November with key speakers from NearForm, Google, the Financial Times, IBM and BuzzFeed all confirmed.