Chipmaker paid ‘billions of dollars’ to Apple so that it wouldn’t buy from rivals, EU says 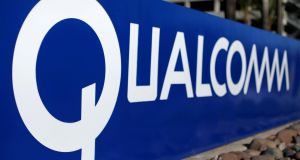 Qualcomm was fined €997 million by the European Union for paying Apple to shun rival chips in its iPhones.

The biggest maker of chips that help run smartphones “paid billions of US dollars to a key customer, Apple, so that it would not buy from rivals”, EU competition commissioner Margrethe Vestager said in an emailed statement. “This meant that no rival could effectively challenge Qualcomm in this market, no matter how good their products were.”

Qualcomm violated antitrust rules by using incentive payments to Apple, one of its biggest customers, as well as price reductions to ensure exclusivity, the EU said. The company shut out rivals from the market for LTE baseband chipsets used in the 4G mobile phone standard for five years, it said.

“Apple was seriously thinking of switching” from Qualcomm to Intel chips “which would have made a big difference to Intel,” Ms Vestager told reporters at a Brussels press conference. “It would have cost Apple a lot of money” if it switched chips while the deal was in place and it only started to source from Intel when the agreement was about to expire in September 2016.

“The outcome is that rivals are prevented from challenging dominant companies with more innovative products,” Ms Vestager said.

Ms Vestager said the decision sends a warning to other companies who would contemplate using similar practices: “Don’t go there.”

When asked whether Apple also bears any responsibility for the practice, Ms Vestager said this was about Qualcomm and there was no evidence of wrongdoing from Apple.

The EU moves come as Qualcomm tries to fend off a $105 billion (€85 billion) hostile takeover by rival Broadcom and wages war with Apple in numerous court cases around the world over patent licensing.