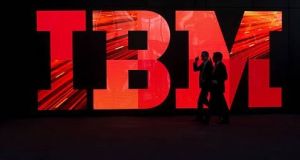 International Business Machines’s revenue rose for the first time in 23 quarters, beating analysts’ estimates, but the company warned that a higher tax rate this year would eat into its profit.

IBM’s shares, which have rallied 10 per cent so far this year on hopes of a strong turnaround in the company’s fortunes, fell more than 3 per cent in extended trading on Thursday.

The company forecast stable margins and revenue growth for 2018, buoyed by growth in its newer businesses such as cloud computing and security services.

“According to street expectations we’re already very low for earnings...but still, you would have liked to have seen, with the little better revenue trajectory and some positive comments, that would have played in to a nicer number,” Pivotal Research analyst Lou Miscioscia said.

“Tax will be a headwind in 2018,” IBM veteran and new chief financial officer James Kavanaugh said on a conference call.

Mr Kavanaugh said IBM would continue to “maintain a high level of investment” in 2018 as it boosts its capabilities on its high-margin “strategic imperatives” such as cloud, mobile, cybersecurity and data analytics.

The company’s revenue finally rose in the latest fourth quarter, the first year-over-year increase since the first quarter of 2012, just after Mr Rometty became cheif executive.

Revenue from IBM’s cloud business jumped 30 per cent in the latest quarter. Turnover from all “strategic imperatives” rose 17 per cent.

IBM swung to a loss of $1.05 billion from a year-ago profit of $4.50 billion due to a $5.5 billion tax reform-related charge. Its adjusted profit of $5.18 per share beat estimates by a penny.

The company’s adjusted gross margins of 49.5 per cent fell short of market expectations of 50.8 per cent.