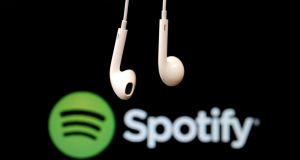 Spotify, the world’s biggest selling music streaming service, expects revenue to grow 20-30 percent this year as currency swings slow the pace from 2017 and it gears up for one of Europe’s most anticipated stock listings.

Shares of Spotify Technology SA are set to begin trading on the New York Stock Exchange on April 3rd in an unusual direct listing without traditional underwriters.

The company was valued around $20 billion based on private stock transactions among existing investors and employees in February, according to its filing.

Loss-making Spotify, which is prioritising rapid growth over profits, said it expected to have signed up between 73 and 76 million paying subscribers this month, roughly twice as many as closest rival Apple has disclosed. For the full year, it is aiming for 92-96 million premium users, it said.

It expects total monthly active users in March to number 168-171 million, including those who use the service for free in return for watching advertisements, up from 157 million at the end of last year.

Operating losses should narrow during 2018 to between €230 and €330 million, the company said, including €35-40 million euros in costs associated with its stock market listing. In 2017, Spotify reported charges on debt financing drove up operating losses to €378 million.

The 2018 sales forecast compares with the Stockholm-based company’s long-term target for revenue to grow between 25 and 35 per cent, which it spelled out for investors earlier in March.

Gross margins for the first quarter are expected to rise to around 23-24 percent from 21 per cent for last year as a whole and possibly reach 23-25 per cent in 2018 overall. That remains well off its long-term target of 30 to 35 per cent.

1 Basic income for all: Has the Covid crisis given us a new economic model?
2 Promontoria barred from pursuing doctor over Ulster Bank loan
3 ‘I don’t need to do any of this. . .I don’t actually need to work.’
4 Only way is up for Stripe as valuation skyrockets
5 Anti-alcohol zeal of public health experts peppers reopening debate
Real news has value SUBSCRIBE