Company, which employs over 1,400 locally, reports loss due to currency changes 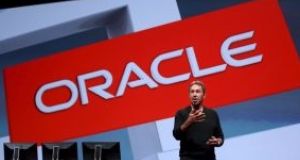 A sharp slide in the value of the Russian rouble proved costly for enterprise software and hardware giant Oracle’s main Irish subsidiary, which recorded a €10.4 million operating loss last year.

This compares to a €109.2 million profit a year earlier with the company attributing the decline in large part to a €62.4 million foreign exchange loss, as well a rise in provisions.

The company’s tax liability was €32.6 million as against €39 million a year earlier.

During the reporting period, Oracle EMEA Limited announced 450 additional sales jobs in Dublin as part of a major new expansion to support the growth of its cloud business.

Staff costs, including wages and salaries, increased from €104.5 million to €132.5 million.

Oracle said it invested €41 million in research and development activities last year, up from €35.9 million in 2015.

The Irish subsidiary late last year acquired property for a cost of €7.65 million, the accounts show.

Oracle is the world’s largest provider of enterprise software and one of the biggest for computer hardware products and services.

In recent years it has expanded its business in a move that has led it to move away from databases to become a leading cloud computing firm.

The group’s parent, Oracle EMEA Holdings Limited recorded a €64.8 million loss, down from a €1.3 billion loss a year earlier.

The unit’s ultimate parent, Oracle Corporation, which was founded by Larry Ellison, Ed Oates and Bob Milner in 1977, has a market cap of more than $180 billion and annual revenues that tops $37 billion.

1 Will Revenue come calling with tax bill if inheritance tax threshold falls?
2 Lidl goes to court over Aldi price survey
3 Dublin banker sells island off coast of west Cork for €5.5m
4 If tourists are such pariahs should we not be testing them on arrival?
5 Social housing expected to attract considerable private investment
Real news has value SUBSCRIBE