Pretax profits up 28% at BT Ireland as turnover jumps 14%

Accounts show full-year revenues rose to €507.8m in 12 months to end of March 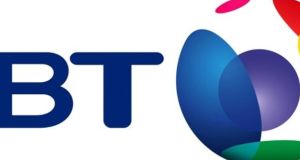 BT, which operates on an all-Ireland basis, employed 613 people in the Republic during the reporting period

Telecoms group BT’s main Irish subsidiary has reported a 14 per cent jump in revenues on the back of increased business in its wholesale and business divisions.

Newly filed accounts for BT Communications Ireland Limited, which is responsible for the group’s operations in the Republic, show turnover rose to €507.8 million for the 12 months to the end of March 2016, as against €444.1 million a year earlier.

BT Communications Ireland Limited provides global connectivity and networked IT services to both the private and public sector. It also offers wholesale network services to more than 50 communications companies.

In a note attached with the accounts, the company said revenues in its wholesale division increased year-on-year, driven by growth in existing contracts, which include its agreement with Sky for roll-out of its fibre broadband service.

Turnover in the company’s business division also rose due to a number of large one-off ICT sales to global customers, it said.

In addition, there was an increase in core revenues from existing multinational customers, resulting in growing demand for high-speed and wireless networks, global connectivity, unified communications, and cloud and data centre services.

The latest accounts show the company received a €1.6 million dividend from the Group BT Limited subsidiary last year. The unit has since been sold to a fellow BT Group firm.

BT, the second largest fixed line communications and IT services company in the Republic, operates on an all-Ireland basis. It employs about 3,000 people across its Irish operations.

According to the latest accounts, the company employed 613 people in the Republic during the reporting period, down from 696 two years earlier. Staff-related costs totalled €50.1 million, versus €50.2 million a year earlier.

“We delivered a strong financial performance in our Republic of Ireland business for the year ending 31st March 2016. This was driven by a number of significant new deals in the year and our continued strategic focus on the global and indigenous multinational corporation market,” said Shay Walsh, managing director of BT Ireland.

“Investments in network reach, data centres and product development further boosted performance as customers continue to seek an ICT company that can deliver both local and global communications capabilities to address their ambitions,” he added.