Why hire a celebrity influencer when you can design your own?

Virtual brand promoters are so lifelike, you just might believe what you see 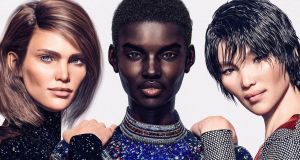 Balmain commissioned British artist Cameron-James Wilson to design a “diverse mix” of digital models, including a white woman, a black woman and an Asian woman 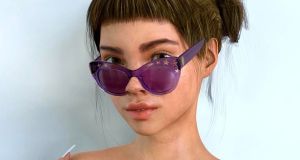 Lil Miquela: a computer-generated character who has 1.6 million Instagram followers

The kiss between Bella Hadid and Miquela Sousa, part of a Calvin Klein commercial last month, struck many viewers as unrealistic, even offensive.

Hadid, a supermodel, identifies as heterosexual, and the ad sparked complaints that Calvin Klein was deceiving customers with a sham lesbian encounter. The fashion company apologised for “queerbaiting” after the 30-second spot appeared online.

But Hadid, at least, is human. Everything about Sousa, better known as Lil Miquela, is manufactured: the straight-cut bangs, the Brazilian-Spanish heritage, the bevy of beautiful friends.

Lil Miquela, who has 1.6 million Instagram followers, is a computer-generated character. Introduced in 2016 by a Los Angeles company backed by Silicon Valley money, she belongs to a growing cadre of social media marketers known as virtual influencers.

Each month, more than 80,000 people stream Lil Miquela’s songs on Spotify. She has worked with Italian fashion label Prada, given interviews from Coachella and flaunted a tattoo designed by an artist who inked Miley Cyrus.

Until last year, when her creators orchestrated a publicity stunt to reveal her provenance, many of her fans assumed she was a flesh-and-blood 19-year-old. But Lil Miquela is made of pixels, and she was designed to attract follows and likes.

Her success has raised a question for companies hoping to connect with consumers who increasingly spend their leisure time online: Why hire a celebrity, a supermodel or even a social media influencer to market your product when you can create the ideal brand ambassador from scratch?

That’s what fashion label Balmain did last year when it commissioned British artist Cameron-James Wilson to design a “diverse mix” of digital models, including a white woman, a black woman and an Asian woman. Other companies have followed Balmain’s lead.

Human simulations have existed for years. They have dealt cards in Las Vegas, made music in the band Gorillaz and lived an approximation of real life in the “Sims” video game. But lately they have become more realistic and more engaging.

Fable Studio, which bills itself as “the virtual beings company”, created Lucy, a cartoonish character able to read and respond to viewers’ reactions in real time. The company says it makes digital creations “with whom you can build a two-way emotional relationship”.

“Eventually, it will be clear that the line between a Miquela and an Alexa is actually very slim,” he said.

Virtual influencers come with an advantage for the companies that use them: They are less regulated than their human counterparts. And the people controlling them aren’t required to disclose their presence.

Many of the characters advance stereotypes and impossible body-image standards. Shudu, a “digital fabrication” that Wilson modeled on the Princess of South Africa Barbie, was called “a white man’s digital projection of real-life black womanhood” by The New Yorker.

The Federal Trade Commission acknowledged in a statement that it “hasn’t yet specifically addressed the use of virtual influencers” but said companies using the characters for advertising should ensure that “any claims communicated about the product are truthful, not misleading and substantiated”.

In a way, virtual influencers are not so far removed from their real-life predecessors. It’s no secret that the humans who promote brands on social media often project a version of daily life that is shinier and happier than the real thing. But when a brand ambassador’s very existence is questionable – especially in an environment studded with deceptive deepfakes, bots and fraud – what happens to the old virtue of truth in advertising?

Bryan Gold, chief executive of #Paid, which connects influencers to companies, said virtual influencers could lead companies into “a dangerous area”, adding: “How can consumers trust the message being put out there?”

But the concerns faced by human influencers – maintaining a camera-ready appearance and dealing with online trolls while keeping sponsors happy – do not apply to beings who never have an off day.

“That’s why brands like working with avatars – they don’t have to do 100 takes,” said Alexis Ohanian, a co-founder of Reddit and the self-described grandfather of virtual influencer Qai Qai.

“Social media, to date, has largely been the domain of real humans being fake,” Ohanian added. “But avatars are a future of storytelling.”

KFC recently introduced a new Colonel Sanders on social media. He has a dusting of stubble on his jaw, tattooed abs, a silver coif worthy of a teen idol and bulging biceps beneath a perpetually unbuttoned white jacket.

The reimagined fried chicken kingpin – another virtual being – was designed to spoof the vast ecosystem of influencers, which includes nanoinfluencers, kidfluencers and petfluencers. His creators consulted an inspiration board plastered with photos of human Instagram celebrities to generate the mashup that became the new Colonel.

“It was our opportunity to poke a little fun at the advertising world that we’re a part of,” said Steve Kelly, KFC’s digital and media director. “But the love around virtual influencers is very real.”

The rising presence of uncannily realistic computer-generated beings in ads can be off-putting, however, in a realm where a manipulated video can make US House Speaker Nancy Pelosi appear to be slurring her words and the Mona Lisa can be “trained” to speak.

“It’s an interesting and dangerous time, seeing the potency of AI and its ability to fake anything,” Ohanian said.

Lil Miquela operated for two years before it was revealed that she was the product of a secretive company, Brud. Its California business registration lists an address in Silver Lake blocked by thick vegetation, but workers, who must sign nondisclosure agreements, said the company actually operates out of downtown Los Angeles. Brud’s public relations firm, Huxley, declined multiple interview requests.

On a public Google Doc that functions as the company’s website, Brud bills itself as “a transmedia studio that creates digital character driven story worlds” and says Lil Miquela is “as real as Rihanna”. Its “head of compassion”, in Brud-speak, is Trevor McFedries, whom Lil Miquela has referred to in several posts as a father figure.

Before co-founding Brud, McFedries was known as Yung Skeeter, a DJ, producer, director and musician who has worked with Katy Perry, Steve Aoki, Bad Robot Productions and Spotify. He has helped raise millions of dollars in financing from heavyweights like Spark Capital, Sequoia Capital and Founders Fund, according to TechCrunch.

Last summer, Lil Miquela’s Instagram account appeared to be hacked by a woman named Bermuda, a Trump supporter who accused Lil Miquela of “running from the truth”. A wild narrative emerged on social media: Lil Miquela was a robot built to serve a “literal genius” named Daniel Cain before Brud reprogrammed her. “My identity was a choice Brud made in order to sell me to brands, to appear ‘woke’, ” she wrote in one post. The character vowed never to forgive Brud. A few months later, she forgave.

The online drama was as engineered as Lil Miquela herself, part of a “storyline written by Brud,” according to Huxley. It echoed “S1m0ne,” a 2002 film starring Al Pacino as a film director who replaces an uncooperative actress with a digital ingénue.

While virtual influencers are becoming more common, fans have engaged less with them than with the average fashion tastemaker online, according to data from Captiv8, which connects companies to social media influencers.

“An avatar is basically a mannequin in a shop window,” said Nick Cooke, a co-founder of the Goat Agency, a marketing firm. “A genuine influencer can offer peer-to-peer recommendations.”

There may be hope for the humans yet. - New York Times News Service

5 Sorry, Domhnall Gleeson, I don’t want to chat to you anymore