way2B is a smartphone and smartwatch solution with pre-programmed routes 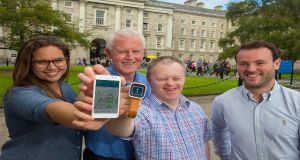 A new software solution that helps people with intellectual disabilities navigate independently has won the Irish leg of the 2017 James Dyson Award.

way2B is a smartphone and smartwatch solution, which allows carers to pre-programme set routes with turn-by-turn directions, which users can follow easily and independently.

Robbie from Belfast and Talita, originally from Brazil, were first inspired to invent a product that would integrate people with intellectual disabilities into society as Mechanical Engineering undergraduates.

Nine prototypes later, the pair are still developing the final product, which is being trialled with six individuals who have Down syndrome in conjunction with their carers. They hope to launch a final product next year.

The pair will now proceed to the international stage of the competition and will compete against students from 23 different countries to win the overall James Dyson award and the grand prize of €35,000.

Dyson engineers will announce the top 20 international finalists on September 28th with the overall global winner will be selected by James Dyson the following month.