Fenergo to create 100 jobs in push towards €100m revenue target 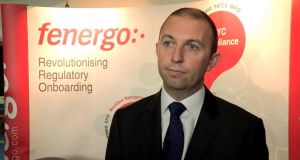 Fenergo chief executive Marc Murphy: “We are building a multinational in our home town and people are buying into the journey we are on.”

Fast-growing Irish fintech firm Fenergo is to create 100 new roles in addition to the 200 jobs announced earlier this year.

The company, which has also announced two key senior appointments, is looking to double revenue by 2019 as it reported a sharp rise in turnover for the 12 months ending March 2017.

The company said it is to take on an extra 100 people to bring headcount to about 600 after filling the previously announced roles ahead of schedule. Hiring for the new jobs, which cover a number of areas including software engineering, training, sales and compliance, has already begun.

“We thought it would take us until Christmas to fill the 200 roles we announced in late March, but we actually had everyone in by July. We are building a multinational in our home town and people are buying into the journey we are on and want to be part of it. So much so that they are leaving the likes of Citi and State Street to be with Fenergo,” Mr Murphy told The Irish Times.

Ergo, which acquired a 20 per cent stake in Fenergo for $4 million in 2013, sold its shareholding to private equity firms Insight Partners and Aquiline Capital Partners for $75 million in August 2015. Insight was an early investor in the likes of Twitter, Flipboard, Tumblr and Hootsuite.

With ambitions to launch an initial public offering by 2020, Fenergo is targeting turnover of €100 million by fiscal 2019. Mr Murphy said revenue will exceed €50 million this year and could even hit €60 million.

“Things are going incredibly well for us. We’re hitting two big tailwinds in banking, which is digital transformation and increased mandatory regulation-related spend. The offering we have serves both of those asks in one and so banks love us, which explains why we’re having such great success,” he said.

The company, which previously recorded a €2.83 million pretax loss has since reduced losses to about €500,000 and expects to report a profit in the next financial year.

Fenergo has also announced the appointment of Michele Sheppard as chief revenue officer (CRO) and Greg Watson as managing director of sales and strategy.

Ms Shepard was previously CRO for Vertafore, the largest provider of technology for the insurance sector in the United States. Mr Watson, meanwhile, joins the company from HSBC, where he served in a number of roles including as managing director and global head of the client management group for the bank’s global banking and markets division.

“Two years ago we couldn’t have afforded people of this calibre but as we march towards €100 million we need people like Michele and Greg to help create the pillars on which to build the next layer of the team upon,” said Mr Murphy.