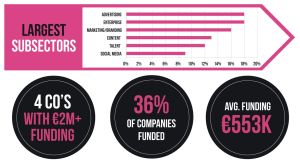 There are now close to 100 indigenous companies working in the social media/advertising space in Ireland, with start-ups in the sector having collectively raised nearly €50 million.

New figures compiled by TechIreland show that companies in the space employ more than 2,600 people with the biggest firm Biztweet, employing 453 staff alone.

The data reveals that as many as 36 per cent of start-ups have raised finance to date. Collectively, companies have raised €49.8 million with average funding per firm totalling €553,000.

Some 91 per cent of companies in the sector also have a live product.

Anam Technology, a software solutions and integration services provider which designs, develops, integrates and maintains business applications, is responsible for the most funding to date.

The company, which was recently selected by Deutsche Telekom to block unauthorised SMS traffic from apps, has raised €18 million in total.

Not surprisingly, advertising is the largest represented subsection, followed by enterprise, marketing/branding and content.

An adviser to the initiative, Mr O’Leary said the snapshot showed there is a good ecosystem operating in the social media space locally.

“I think we benefit from the fact that so many of the major social media networks are based in Dublin. Access to such companies is better than in other countries and former employees of Facebook, Twitter, LinkedIn and so on are increasingly spinning out their own businesses,” Mr O’Leary said.

In terms of trends, he indicated that a key growth area is in start-ups such as Logograb and Beautifeye, who are focusing on image recognition.

“This is an area becoming increasingly important to our clients and I think we’ll see a growing number of companies emerge in this space,” Mr O’Leary added.

The TechIreland initiative is led by former Dublin commissioner for start-ups Niamh Bushnell, with sponsors including the IDA, Enterprise Ireland, Google, Elkstone and Bank of Ireland.

The database intends to provide a detailed portrait of Ireland’s start-up scene by mapping, tracking and showcasing innovation across the Republic.

The not-for-profit operation is looking to regularly showcase key clusters and explore potential opportunities and trends in innovation across different sectors and regions.

The initiative has so far tracked over 1,300 companies across 13 broad sectors.