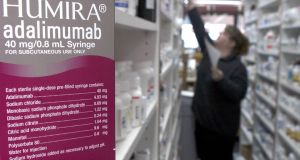 Humira is the biggest single item on its medicines bill and finally came off patent this week.

Medicines and their prices are a particular bone of contention. The Government says it cannot afford the inexorable rise in cost: the industry says its innovation and the risk it takes are not being rewarded.

In the context of an ageing population and the ability of doctors to treat rare conditions for which previously there was no therapy, getting value for money is clearly a priority.

You’d expect then that it was good news for the Health Service Executive and the exchequer when a drug called Humira finally came off patent this week. Originally developed to treat rheumatoid arthritis, it is now used for a variety of inflammatory conditions, including ulcerative colitis and Crohn’s.

And, importantly, cheaper alternatives are available. Five of them, in fact. And even under current restrictive rules, that could mean a saving of up to €37 million a year.

But apparently none is yet approved for reimbursement by the HSE. Although Humira’s looming patent expiry has been known for a long time, the earliest approval is expected in December. Even at this, potential savings of up to €6.5 million will be lost.

Given this year’s record budget overrun, could the HSE and the Government not better serve patients by taking such ready savings without delay.