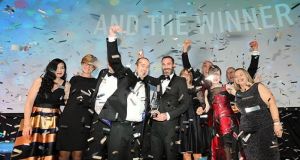 Five Irish firms will go head-to-head in a fight to be named tech company of the year at this year’s Technology Ireland industry awards.

Some 37 entrants have been selected for this year’s awards with Aspire Technology, Cora Systems, Learnupon, ProVision CameraMatics and TDS (Time Data Security), all up for the main prize.

Technology Ireland, an Ibec-affiliated organisation that has more than 200 member companies, has introduced a new category for this year’s eight awards.

The inaugural women in technology award aims to recognise a tech company that has demonstrated “a strong commitment to attracting, retaining and developing women across its workforce”.

Among those shortlisted for the award are Dell EMC, Sun Life Financial, Cisco Systems, Fidelity Investments and Vodafone.

Now in its 26th year, the annual awards seek to highlight successful entrepreneurship and the diversity of the Irish technology sector. Sponsors include Enterprise Ireland, VHI Healthcare, Bank of Ireland and Byrne Wallace.

Shortlisted companies will shortly present to eight independent panels of judges, composed of chief executives and founders of some of the country’s most successful technology companies.

The award winners will be announced at a special ceremony at the Mansion House in Dublin on November 23rd that is expected to attract 500 people.

1 Fair Deal nursing homecare leaves little for bills and gifts
2 Getting out from under ‘never-ending’ Celtic Tiger debt burden
3 Portugal set to curb tax breaks for wealthy foreigners
4 Election 2020: 200,000 new homes over five years? Pledges that don’t add up
5 It’s getting easier and more profitable to be green
Real news has value SUBSCRIBE