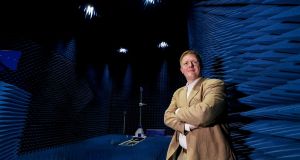 RadioSpace, a new €1.5 million national test centre for next-generation wireless technologies such as 5G and the internet of things (IoT), opens Thursday at Maynooth University.

The facility, which is one of the first of its kind in Europe, provides a range of services to developers of 4G mobile networks, IoT-enabled products and future 5G and mmWave devices.

The facility’s director, Prof Ronan Farrell, said he hoped it would be a catalyst for increased collaboration between academia and industry.

“With RadioSpace, we are opening a unique test facility that will let us take some of the most sensitive measures possible in radio waves, which is essential for both research and industry,” said Prof Farrell, who is also dean of the faculty of science and engineering at Maynooth University.

“It really is a lovely enabling tool. Academics will be able to use the centre for world class research that hasn’t been possible before, while industry will also be able to come in and use the equipment and access expertise here to help them develop their next products,” he added.

Facilities are also to be made available to smaller companies via the Enterprise Ireland Innovation Voucher scheme, something Prof Farrell said he was particularly excited about.

“If you look at IoT, big companies are delivering the infrastructure but it is smaller ones, be it drone manufacturers or start-ups making smart fridges and connected street lights and suchlike who are trying to get into the space. We’ve had some of them come to us and tell us how glad they are to see the centre opening to aid them in coming up with solutions that can go to market,” he said.

The facility was so cutting edge, he said, that the company constructing RadioSpace had warned him that it might not be possible to get it to work.

“There will likely be half a dozen facilities like RadioSpace within a short space of time but at the moment the only ones open are in faraway places like San Diego so having it here is important and it has been warmly welcomed,” said Prof Farrell.

“Industry in Ireland has been trying to secure something like this for at least a decade and there are many companies both locally and internationally keen to get in and use it,” he added.

1 ‘Saudi Arabia is where the opportunities will happen in future’
2 Nearly 30,000 could lose pandemic payment if they do not confirm eligibility
3 ‘No demand... because there are no people’ at well-known Dublin pub
4 Stripe lures Dhivya Suryadevara from General Motors to be CFO
5 German investor pays €60m for Dublin 2 office block
Real news has value SUBSCRIBE