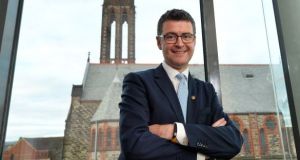 Belfast-listed technology company Kainos said its revenue grew strongly in its last financial year. Income for the year ended March 31st, 2019, was £151.3 million (€171m), up 56 per cent from £96.7 million recorded a year earlier. This marked the ninth consecutive year of growth for the business.

Kainos said there was growth across the business, with the highest recorded in its digital services unit, which grew 69 per cent to £132.6 million.

International revenues rose 44 per cent to £29 million, and commercial revenues were 42 per cent higher at £40 million.

Healthcare revenues, meanwhile, grew 42 per cent to £21.4 million, with SaaS and software-related revenues up 6 per cent £16.9 million. Within the latter section, new clients boosted revenues for Smart, a platform for automated testing of the Workday suite, by 45 per cent to £11.3 million. Among its new customers signed up during the year were Home Depot, Prudential and Vassar College.

“In digital transformation we continue to deliver significant programmes in partnership with the UK government and with leading commercial and international clients. In what is now a familiar pattern, our growth is fuelled by demand from both existing and new clients,” said Kainos chief executive Brendan Mooney.

Kainos is proposing a dividend of 9.3 pence, a 41 per cent rise year-on-year.

The company invested £4.3 million in research and development during the year, and also expanded its international office network to support its growing overseas client base, including an office in Canada.

Staff numbers at Kainos grew over the year, with 1,470 people working with the company by the end of the reporting period, a 26 per cent rise on last year’s figures. The company said it was continuing to recruit.

“The group’s pipeline of prospects continues to strengthen, and the board believes that the group is well-positioned for growth both in the short term and in the coming years,” Mr Mooney said.