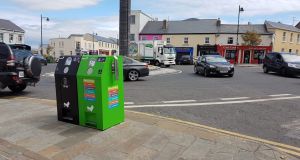 Two Solar Street Bins, which are manufactured by PEL Recycling in Co Mayo

Mayo-based waste group PEL Recycling has won a tender to supply solar street bins on two of the busiest streets in Galway city using new technology patented by the company.

PEL’s founder and chief executive Tommy Griffith said the company would supply 50 units on Eyre Square and Shop Street in Galway city, as part of a contract valued at €250,000.

PEL has developed a solar-powered street bin that compacts waste, and allows the bins to hold 10 times their usual load. The waste is captured in a 120-litre wheelie bin housed inside the street unit.

The bins are fitted with cloud-based software that provides real-time information on the bin and alerts a local authority when it is full and needs to be emptied. Mr Griffith said this would reduce the number of times a council would need to empty the bins.

“[Galway City Council was] emptying bins on Shop Street up to five times a day during the summer. With our bin, that’s down to every second day. It leads to cleaner streets, is more cost effective and generates fewer emissions,” Mr Griffith said.

He was speaking on the fringe of the EY Entrepreneurs of the Year Awards chief executives retreat in Hong Kong last week. Mr Griffith, a finalist in 2009, is a member of the award programme’s alumni board.

The bins have pedals so members of the public don’t have to open them with their hands, and they have flaps that keep seagulls and rodents out.

The Galway contract is PEL’s first tender win in Ireland, although it has contracts in London, San Francisco, Paris and elsewhere.

It is tendering for other contracts in Ireland, as well as in Norway, France, Belgium and the UK. “The beauty is that for every 250 people, there’s one street bin. If you take London, there’s a carbon emissions tax just being introduced ... with our bins, we’re reducing the amount of trucks going into city-centre locations. There’s 40,000 street bins in London, so there’s huge potential for us. It’s all about creating an efficiency. The world is our oyster.”

Founded in 2005, PEL is better known as a manufacturer of a range of bottle- and glass-crushing compacting equipment for the hospitality sector. According to Mr Griffith, PEL has 28 staff and annual turnover of €25 million a year. “This coming year we’ll do over 1,000 bins,” he said. “We’ve been developing this product for the past four years and have a global patent on it. It’s a new market for us.”