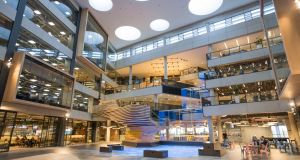 MIOL is the Microsoft subsidiary tasked with marketing, selling and distributing hardware and software to Europe, the Middle East and Africa.

The company also noted $32.5 million (€26.4 million) due to long-term creditors, which relates to a dark fibre cable that was acquired in 2016 but not put into service. It will be returned to Hibernia Express over a three-year period.

The accounts show employee numbers climbed from the previous year, with an average of 895, but the current figure is closer to 1,500. In February 2017, Microsoft announced it would recruit 600 people for its inside sales team, and made a further announcement of 200 jobs in October last year.

Microsoft recently opened its new campus at 1 Microsoft Place in Leopardstown, Co Dublin. The 34,000sq m campus cost €134 million, and will house almost 2,000 staff. Among the attractions for the campus are an LED waterfall and digital lake, an indoor “mountain” and a “DreamSpace” for teaching the next generation about technology.

The move sees Microsoft bring most of its Irish staff under one roof; previously, staff were split among a number of buildings in Sandyford.

MIOL is one of the software giant’s Irish subsidiaries, with its operations here also including the unlimited company Microsoft Ireland Research, Flat Island Company, which licenses Microsoft software for use in Europe, the Middle East and Africa, and Round Island One.