Company is best known for its Finbos platform 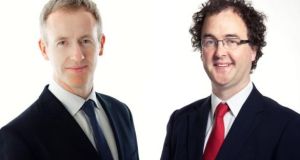 Paul and Kerril Burke of Meritsoft

Meritsoft, a Dublin-based specialist financial services software company, has been acquired by Nasdaq-listed IT services group Cognizant for an undisclosed sum.

Founded by brothers Paul and Kerril Burke as Merit Software in 2000, the company is best known for its Finbos platform. This is an automation solution for managing taxes, fees, commissions, and cash flow functions between financial institutions.

The company’s technology is currently used by five of the world’s eight leading investment banks.

“By becoming part of Cognizant, Meritsoft will have access to its knowledge, resources and scale to accelerate growth as we continue to innovate on the Finbos platform for post-trade solutions,” said Kerril Burke, the company’s chief executive.

The former EY Entrepreneur of the Year award finalists were recently named management team of the year by the British Private Equity and Venture Capital Association.

Accounts filed for Meritsoft show accumulated profits rose to €16.2 million for the 12 months to the end of March 2018. This compares with profits of €12.9 million a year earlier.

Cognizant Technology Solutions, was founded as an in-house technology unit of Dun & Bradstreet in 1994. The New Jersey-headquartered IT services company recorded revenues of $16 billion last year.

The company, which is increasingly focused on cloud computing, cybersecurity and analytics, competes with Accenture and with major Indian IT companies such as Tata Consultancy Services, Wipro and Infosys.

Cognizant, which recently announced Brian Humphries as its chief executive designate in place of Francisco D’Souza, last month agreed to pay $25 million to the Securities and Exchange Commission (SEC) to settle a case related to a bribery scheme involving two former executives in India.