Leinster Rugby players among those to back Output in €1.3m funding round 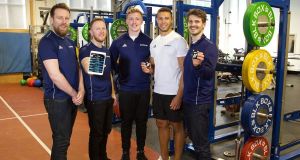 Output is a University College Dublin spin-out, focused on developing wearable technologies for sports coaches and athletes to optimise their performance.

The company was co-founded in 2018 by Dr Martin O’Reilly, Dr Darragh Whelan, Julian Eberle and Prof Brian Caulfield as a spin-out from the UCD School of Public Health, Physiotherapy and Sports Science and the Insight SFI Research Centre for Data Analytics.

Using advanced signal processing and machine learning techniques, the start-up has developed a solution called Output // Capture that can measure athletic performance via a wearable sensor. The product is being used by more than 40 professional sports teams across rugby, football and athletics.

The funding is to be used to help the company expand into other markets and to expand employee numbers.

Dr O’Reilly recently won the Best Business Idea Award at the national final of Ireland’s Best Young Entrepreneur 2019 (IBYE) competition for his idea while the company was a national finalist in the Intertrade Ireland Seedcorn competition.

“As a company we believe greatly in the importance of interdisciplinary collaboration. This funding will enable us to build our team who have skills and expertise in business development, sports science, engineering, data science, strength and conditioning and physiotherapy. In the coming months the company will grow to a team of nine based at NovaUCD,” said Dr O’Reilly.

The company recently secured close to €500,000 in investment from Japanese consumer electronics giant Sony as part of a €5.1 million fundraise.

Sports tech has become fertile ground for Irish companies, with a number of successful start-ups making waves globally. These include StatSports, which made headlines when it signed a lucrative five-year contract with the US Soccer Federation. It recently announced that soccer stars Raheem Sterling and Alex Oxlade-Chamberlain had each invested seven-figure sums in the company and agreed to become global ambassadors as part of a new funding round.

Elsewhere, Orreco, a Galway-headquartered start-up whose backers include golfer Graeme McDowell, has signed a number of significant deals recently including one with NBA side Atlanta Hawks.