System will eventually recognise and monitor every individual fish in farms 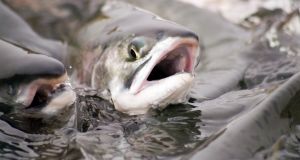 The advanced research lab at Google’s parent company, Alphabet, is taking aim at an unlikely new target for its technologies: fish.

In an attempt to boost the use of fish farms, and reduce the world’s consumption of wild fish and meat, Alphabet’s X Development has invented a system that will eventually recognise and monitor every individual fish in farms that hold hundreds of thousands.

The three-year-old project, dubbed Tidal, is working with farms in Europe and Asia. It pairs underwater cameras with AI techniques such as computer vision to track species including salmon and yellowtail.

The hope, according to Astro Teller, the director of X, is to reduce the world’s dependence on land-based proteins, such as beef, and to free the oceans from damaging fishing practices.

“The oceans are falling apart thanks to us, thanks to humanity. So something has to change,” he said, discussing Tidal publicly for the first time.

“No more [eating] fish isn’t really on the cards any time soon. What can we do to make it as good for the planet as possible?”

“It’s dark, it’s cold, it’s unforgiving, saltwater kills electronics, the pressure is crushing, the temperature can shift from above boiling to below freezing in a matter of minutes.”

The team of around a dozen X staff had to build a fresh data set of fish to train its algorithms, initially by filming in a paddling pool at its Silicon Valley headquarters.

Its stereo camera rig, which is lowered into a farming enclosure, is able to track fish through their development, using their particular shapes and movements.

“Some of these signals are happening in milliseconds,” said Neil Davé, who leads the Tidal project. “You’d be unable to see it with the human eye.”

Data and insights collected from Tidal’s system are sent to farmers to help them optimise feeding, reduce waste and maintain healthy fish, in the hopes of easing some environmentalists’ concerns about overuse of antibiotics.

“Really what we are hoping to do is provide these tools to farmers so that they can move their operations towards more sustainability,” said Mr Davé.

“There may be an opportunity there to relieve some pressure on wild fishing if we made aquaculture very compelling from an operational and environmental perspective.”

The sensors Tidal develops for fishing could also be used for more general ocean monitoring, where researchers often struggle to keep track of endangered species such as whales and penguins in the wild.

The research team formerly known as Google X is best known for its work on self-driving cars, internet balloons and delivery drones.

Its other efforts related to sustainability include domestic geothermal power, storing energy in salt and using drones to monitor farming on land.

While Tidal is still early in its development, Mr Teller said he hoped it could become a “substantial business”, as well as delivering environmental benefits.

“There are several trillion dollars a year at stake in the oceans and in humanity’s relationship with the oceans,” he said. – Copyright The Financial Times Limited 2020

1 Coronavirus: Property rental in the jaws of the epidemic
2 Covid-19 crisis shows drastic economic policy changes possible – Piketty
3 Chopra warns coronavirus will have ‘deeper’ impact than financial crisis
4 Staff in Dublin and Cork airports receive profit share and bonuses for last year
5 I want to change my will quickly in case I fall ill. Do I need a lawyer?
Real news has value SUBSCRIBE