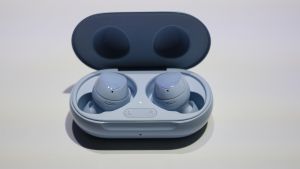 When Samsung released its Galaxy Buds last year, there wasn’t a huge amount of competition – not reasonably priced contenders, at the very least.

If you had an iPhone, you went for Airpods, and everyone else was left with the option of shelling out for Bose, Sony or another manufacturer.

Then came the Galaxy Buds, with a six hour battery life, squishy tips to make sure they were a comfortable fit, and a decent enough seal to keep out the background noise. And did I mention they were €160?

So: decently priced, great sound and small enough to slip into your pocket. So why would you upgrade to the Buds+?

A couple of reasons. The main one? Battery life. The Galaxy Buds+ have a much better battery life than their predecessors – 11 hours versus the six hours of the originals. That also puts the new ear buds ahead of rivals Apple and Huawei. Add in the capacity of the charging case and you have 22 hours of use. In practice, it means you no longer have to stop listening on long journeys because your earbuds need a charge – although they do recharge to a usable level quite quickly – and you can charge the case less.

The second major reason is sound quality. The Buds did well but the Buds+ do better. Samsung lists all the technology it has packed in to the earbuds to improve the sound, but really all most people want to know is do they actually sound good. The short answer is yes.

Are they better than what’s currently available? The main rival is the Apple AirPods Pro and the big difference between the two is noise cancellation. The more expensive Pro version of Apple’s bluetooth buds are exceptionally good at this, sealing out most of the noise with the customisable tips and the active noise cancellation taking care of a lot of the rest. It won’t exclude everything, but it takes care of a good bit of the background distraction. The Buds+ don’t have this, so you are relying on a good fit to block out background noise. There are a few different tips that you can switch around though, so that shouldn’t be a problem.

Another reason to opt for the updated version of the buds is that they are IPX2 rated. Before you get too excited, it’s one of the most basic water resistance ratings, protecting it from water that hits it at a 15 degree angle or less. That means it will take a few splashes without keeling over, so you can go for a run in the rain(maybe not the torrential downpours we have been having lately, mind you) and the buds should make it through unscathed.

Like their predecessors, the Buds+ have touch sensitive panels that you can use to control music or calls. There is also the ability to lock the touchpad, which is handy because I found it very easy to accidentally activate the touchpad while adjusting the buds in my ear.

The new Buds also come with a new app for iOS users, the Samsung Galaxy Buds app. That means you get the same controls that Android users get – sound settings, software updates, touch control settings – on Apple iPhones.

If you are a Spotify user, good news: you can now access the streaming music service guy through the earbuds directly. No more fiddling about with phones, no more jabbing at the screen to find your playlist.

Looks wise, Samsung has stuck very much to its previous design. That extra battery life means a slight bit of extra weight, although it’s virtually unnoticeable. And the latest version has a new colour, with Samsung ditching the neon green for a more muted blue.

The new Buds+ have better sound and much improved battery life. Plus Apple users can now buy the Buds+ and get all the same controls of their Android counterparts. And although the price is slightly higher, €180 still feels like a bit of a bargain.

No noise cancelling puts these at a slight disadvantage to other earbuds, but the noise isolation does well.

The water resistance rating is welcome but could be better, as IPX2 is quite low down the scale. I’d also like to see more support for advanced audio codecs, which the Buds+ lack.

1 Chris Johns: Economies may enjoy ‘roaring twenties’ if ministers learn lessons
2 Wet pub openings fuelled rise in Irish Covid infection rates – report
3 Profits jump threefold at LinkedIn’s Irish unit to $294.2m
4 Basic income for all: Has the Covid crisis given us a new economic model?
5 ‘I don’t need to do any of this. . .I don’t actually need to work.’
Real news has value SUBSCRIBE