Jeff Bezos sells €3.2bn of Amazon shares in a week 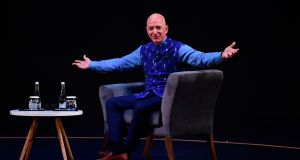 Jeff Bezos now owns about 11 per cent of Amazon, the company he founded in 1994, and which recently exceeded a market capitalisation of $1 trillion.

Amazon founder Jeff Bezos has sold almost $3.5 billion (€3.2 billion) worth of shares in the company over the course of the past week.

Previously Mr Bezos, who according to Bloomberg’s Billionaires Index remains the richest man in the world, said he planned to sell his Amazon stock in order to fund his space exploration company, Blue Origin.

“The only way that I can see to deploy this much financial resource is by converting my Amazon winnings into space travel,” said Mr Bezos in 2018, speaking to Axel Springer chief executive Mathias Döpfner at an event in Berlin.

Mr Bezos now owns about 11 per cent of Amazon, the company he founded in 1994, and which recently exceeded a market capitalisation of $1 trillion.

The trades were conducted under a Rule 10b5-1 plan, a means to allow insiders to sell a number of shares within a predetermined time frame and price range, so as to avoid allegations of using non-public company information for personal gain.

Mr Bezos’s last stock sell-off occurred in July and August last year when, in another prearranged trade, he offloaded just over 1.5 million shares – at the time worth $2.8 billion.

Amazon declined to comment. A spokesperson for Mr Bezos could not be reached.

Also in 2018, Mr Bezos and his then-wife Mackenzie Bezos pledged $2 billion to help combat homelessness, and to fund new schools for low-income families.

However, the fund’s activity to date appears to have come via stock gifts rather than direct donations. According to a filing on November 21st, 2019, Mr Bezos donated 56,702 shares, worth just under $99 million, to unspecified non-profit organisations. On the same day it was announced the Bezos Day One Fund had shared $98.5 million among 32 homelessness charities. – Copyright The Financial Times Limited 2020