Google gets 17,700 ‘right to be forgotten’ requests from Ireland 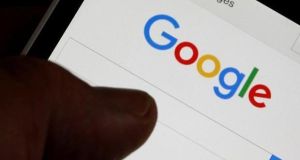 Of the total 2.4 million requests for links to be deleted by Europeans, 43 per cent have been granted, Google said

Google has received more than 17,700 requests from users in Ireland to delete search-engine results since the introduction of “right to be forgotten” rules in Europe in 2014.

Overall, some 2.4 million requests to delist have been made under the rules.

The rules came into force nearly four years ago after the European Court of Justice established the right for individuals to ask search engines to delete information about themselves appearing in queries.

According to a new report from Google, there have been 5,403 requests involving the deletion of 17,721 URLs in Ireland since the regime came into place on May 29th, 2014.

In deciding what to delist, search engines such as Google must consider if the information in question is “inaccurate, inadequate, irrelevant or excessive” – and whether there is a public interest in the information remaining available in search results.

Since January 2016, just over 35 per cent of requests in Ireland related to news stories, with a further 11 per cent linked to social media accounts. The overwhelming majority of requests were marked as “miscellaneous”.

A more detailed breakdown of the figures show almost 21 per cent of local requests related to crime, with a further 13 per cent linked to problems with information relating to an individual’s career.

A fifth of requests were to do with insufficient information being included in a search result.

A list of sites most affected by the right to be forgotten ruling in Ireland shows that the largest number of URL requests were linked to newspaper publishers and social media platforms.

The Irish Independent topped the list of domains affected with 210 URLs deleted from independent.ie out of a total of 553 requests. Just over 10 per cent of delisting requests for the Independent’s website came from UK individuals (possibly from Northern Ireland).

The Irish Times was in second place with 109 links deleted from irishtimes.com out of 371 requests.

Other domains included in the top delisted sites from Ireland include Facebook, Twitter, the Evening Herald and the Irish Examiner.

Of the total 2.4 million requests for links to be deleted by Europeans, 43 per cent have been granted, Google said.