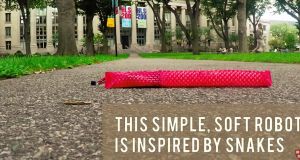 The robot can slither forward just like a real snake

The back-flipping, door-opening antics of Boston Dynamics’s robot dogs Spot and SpotMini are what come to mind when people think of modern robotics, but robots can come in all shapes and sizes, and designers are drawing on some unusual members of the animal kingdom for inspiration.

Harvard University’s Bertoldi Group has been inspired by snakes, developing the kinds of materials that best mimic serpentine movement for what they call “bioinspired soft machines”. Using the Japanese paper-folding technique of kirigami, researchers have created a low-cost laser-cut material that behaves like snake skin by gripping on to flat surfaces as it is expanded and contracted.

The artificial snakeskin is wrapped around a tube-shaped robot that inflates and deflates; as this happens the “snakeskin” expands, causing the surface to separate and grip the ground as it deflates.

This helps the robot to slither forwards just like a real snake. Harvard has no plans to commercialise the robot just yet but says it could be used to “travel across complex environments for search and rescue, exploration and inspection operations, environmental monitoring, and medical procedures”.