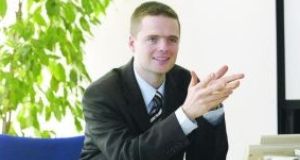 Eric Mosley, co-founder and chief executive of Globoforce, which employs 175 people in Ireland

Globoforce, an Irish software firm that operates employee reward and incentive schemes for many of the world’s biggest companies, returned to profit last year on the back of a sharp rise in revenues.

The company, which ditched a planned listing on the Nasdaq two years ago that valued the company at €400 million, recorded a $2.85 million pretax profit last year after reporting a $9.47 million loss in 2014.

Newly filed accounts for the company, which is co-headquartered in Park West in Dublin 12 and Southborough, Massachusetts, show that turnover jumped 13 per cent to $282 million in 2015. The revenue hike comes after the group saw income jump by a third a year earlier, rising from $186 million to $250 million.

“The growth mainly resulted from the increased issuance and redemption of recognition awards by the employees of existing clients, along with new client additions,” the directors said in a note included with the latest accounts.

Globoforce said expenses totalled 99 per cent of revenues, compared with 10 per cent a year earlier. The difference “in expenses as a percentage of total revenues is due to the costs of withdrawal from the initial public offering (IPO) which were expensed in 2014”, the company said.

Globoforce pulled out off a planned IPO on the Nasdaq in March 2014, citing unfavourable market conditions.

The company raised more than $2 million in funding from venture capital firm Balderton Capital in 2002. A $9.3 million Series B funding round, led by Atlas Ventures, followed two years later.

Globoforce employs about 300 people globally, of whom 175 are based in Ireland, up from 141 a year earlier.

Staff-related costs, including share-based compensation expenses, totalled $14.8 million in 2015. The majority of Irish staff are employed in sales, distribution and administration.

1 Ireland faces 'deep downturn' this year and may not rebound until 2024 if there is a second wave
2 ‘The rental situation stops me moving back home’
3 John FitzGerald: Civil Service expertise key to Government policy
4 Why are markets booming when a crash is on the way?
5 Major works at Rosslare Europort after €30m investment from Irish Rail
Real news has value SUBSCRIBE