Government needs to lock down broadband intervention before tendering can proceed 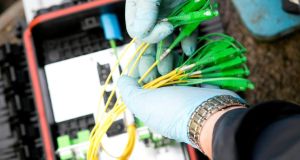 Broadband: Despite complaints about the lack of broadband in certain areas, it remains to be seen how many householders avail of the service once connected. Photograph: Karl Hussey/Fennell Photography

The Government will lock down its broadband intervention footprint early next year, according to insiders. But the three companies vying for the contract (Eir, Siro and Enet) can’t submit bids until they know the scope of the National Broadband Plan.

A problem for the Government, however, is how to deal with Eir’s pledge to connect 300,000 homes already earmarked for the scheme.

Instead of downsizing the proposed footprint in response to the company’s commitment, the Department of Communications surprisingly added another 170,000 homes, expanding the intervention area to as many as 927,000 homes – nearly 40 per cent of the housing stock.

This suggests the department is not minded to take Eir’s pledge at face value. However, it will have to square the circle sooner or later if the procurement process is to advance.

What appears to be going on behind the scenes is difficult to assess, but firms seem to be racing to get areas hooked up to new fibre products in order to showcase their capability in advance of the tender.

At the same time, to ensure progress is not held up, they are leaving clumps of homes, ones that probably need infrastructural improvements, unconnected.

This is proving something of a headache for the department as it tries to nail down a final intervention figure.

Despite the outcry about the lack of broadband in certain areas, it also remains to be seen just how many householders are availing of the service once connected.

Both Eir and Siro have each connected about 40,000 homes with their new fibre-to-the-home product, but won’t reveal the number that have actually bought a broadband bundle on the new network.

Unlike the infrastructural issues that exist in housing, transport and water, there appears to be an obvious solution to the broadband one, to which all parties have signed up and to which funding has been allocated. The only real question is, when will it arrive?