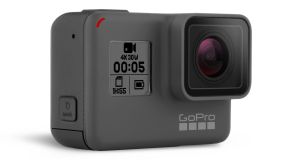 GoPro Hero5: its best camera yet

If you are an extreme sports fans, it’s highly likely that you already know what a GoPro is: a pricey action camera that you can attach to different bits of you and put through utter hell, just for the video footage.

But the latest version, the GoPro Hero 5 could be its best yet. Two reasons: 4k footage and voice control.

The newest GoPro supports shooting in 4k, the ultra-high quality video standard that is currently taking hold, with 12 megapixel stills in the mix. It has one touch operation and a touchscreen on the rear and it’s waterproof.

No extra accessories needed. But it also responds to voice commands for shooting, starting time lapses and so on.

Given the primary target for this camera, that may be its most useful addition of all.