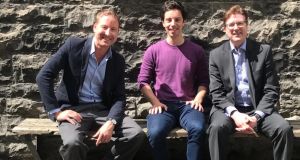 Wia, a Dublin-based start-up that aims to be the “Stripe for the Internet of Things” (IoT), has raised €750,000 in seed funding as it looks to expand globally.

The company has come up with a cloud platform that enables developers to turn sensor-based hardware into IoT devices.

The funding round was led by Waterford-based venture capital (VC) firm Suir Valley Ventures, with participation from Enterprise Ireland.

Established in 2015, Wia’s platform is used by developers in more than 85 countries to turn sensing devices into smart applications.

The company, a former participant in the National Digital Research Centre’s LaunchPad programme, has partnerships in place with a number of leading technology companies including Sigfox, PubNub and Twilio.

Mr Laverty said Wia, which won the Best Start-up award at the Irish Internet Association (IIA) awards last year, will use the seed investment will be used to fund its expansion and for further investment in R&D.

“We intend to use the funding to grow the team out in Dublin and make a big move into the enterprise space,” Mr Laverty said.

The company currently employs six people with plans to double headcount over the coming months.

“What we do is provide all the tools that anyone needs to build Internet of Things solutions. We take care of the invisible infrastructure in much the same way that Stripe does it for payments,” said Mr Laverty.

“Just as Stripe can accept payments from anyone anywhere in the world, we’re doing the exact same thing for IoT. We’re providing all the tools so that customers can focus on the ‘last mile’ so that whether it is a kid creating something in their bedroom or an enterprise customer building a million devices across the world, they can do it though our platform,” he added.

Following the new investment, Suir Valley’s Brian Kinane has been appointed to Wia’s board of directors.

Suir Valley Ventures is a Waterford-based entrepreneur-led VC fund run by Barry Downes, the founder of software start-up FeedHenry, which was acquired by Red Hat for €63.5 million in 2014. Its primary focus is to invest in high-growth, private software start-ups in the augmented reality (AR) and virtual reality (VR) space, with a secondary focus on fintech and IoT start-ups

“Wia’s end-to-end platform provides full device and application management, security, data capture and storage, analysis, control, as well as the seamless integration of enterprise systems. We are looking forward to working with Conall and his team to help them rapidly expand the Wia business with developers and enterprises internationally,” said Mr Downes, who is also chairman of the Waterford-based software research institute TSSG.

The investment marks Suir’s second since its recent launch. In March, the VC, along with Kernel through the Bank of Ireland Kernel Capital Venture Funds and Enterprise Ireland, invested €1 million in Waterford-based Immersive VR Education Limited, a developer of VR software and immersive experiences.

Q&A: Where do we stand on mortgage holidays and payment breaks?

Lockdown exit: How can the economy reopen without big health risks?

1 Facing economic meltdown ... and nothing wrong with our economy
2 Lockdown exit: How can the economy reopen without big health risks?
3 EU ministers fail to agree virus economic rescue in all-night talks
4 German fund closes €93m Harold’s Cross build-to-rent deal
5 I want to change my will quickly in case I fall ill. Do I need a lawyer?
Real news has value SUBSCRIBE