Pavlok wrist band shocks you out of bad habits

Tech review: No gain without pain as silicon bracelet punishes you into good behaviour 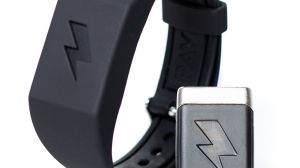 Pavlok: the bracelet will deliver an electric shock, acting as an aversion therapy to help you kick any habit you want to break.

When it comes to wearable tech, the last thing I want is something that causes me pain. I’m not talking mild discomfort, like a rash from a silicon band. No, I’m talking about muscle twitching, yelp-inducing pain. But it’s all in a good cause – breaking your bad habits for good.

Or at least that’s what Pavlok promises. The bracelet will deliver an electric shock, acting as an aversion therapy to help you kick whatever habit you want to break.

It sounds like Pavlok is more of a torture device than wearable tech. The device – a small module, which fits into a silicon band, adorned with a lightning bolt and charged over USB – pairs with an app on your smartphone to control the level of shock you receive, control the notification alerts it provides – vibration and noise – and give you some tips on breaking habits.

It goes like this. When you set up Pavlok, you choose what habit you want to break. Every day you’ll get reminders to check your progress and some motivational stuff to help keep you on track. There’s a five-day introductory course that gives you some important information about how Pavlok works, meditation and some tips to get the most out of it.

I got a bit cocky when setting it up. You can control the level of shock that you deliver through the app; I whacked it up to 70 per cent, quietly confident that a consumer device probably couldn’t pack much of a punch.

The test zap not only stung, but it caused my hand to spasm uncontrollably. Let’s be clear: it hurt. It makes you wonder who would do this to themselves voluntarily? How bad did the habit have to be to warrant torturing yourself at regular intervals throughout the day? It was enough to make me reconsider whether I really wanted to kick the sugar addiction or snacking habit. And I could live with biting my nails, right?

The shock strength was quickly dialled down to 40 per cent, which still stung but was far more acceptable. Still, I wasn’t keen on shocking myself, so it was already acting as a deterrent.

The key thing about Pavlok is that you still have to do all the work really. This isn’t a magic solution. Every time you get the urge to do whatever it is you want to stop, you zap yourself by tapping on the band. The idea is that, over time, you’ll develop an aversion to the habit. It’s a high-tech elastic band on your wrist.

For something like nail-biting, it’s a little easier. Yes, you are supposed to zap yourself but there’s an automatic option too: pick a hand, and if the band detects the hand is raised for too long – while you’re chewing your nails for example – you get a warning, then a shock. Best to disable it while driving or you’ll get a nasty shock on the motorway.

It takes a lot of willpower to shock yourself regularly, especially at the higher end of the scale.

The most effective use I found for it was as an alarm. Pavlok’s app allows you to set alarms that are delivered to your arm; hit snooze after the initial vibration and next time you get zapped. A gentle shock is enough to get you moving, but the fear of getting that shock is probably more effective.

While the idea of shocking yourself doesn’t readily lend itself to “good” points, the device does act as a deterrent for whatever behaviour you want to stop. The shock it delivers is not insubstantial, and it’s not something I’m keen to repeat too often.

Pavlok is about to release its newest device to a crowdfunding campaign, so if you want to break your bad habits and bag yourself a bargain, keep an eye out for falling prices.

Pavlok suffers from the same fate as other wearables: it depends on the wearer remembering to put it on. While Pavlok can shock you into breaking your bad habits, it can’t compel you to wear it – and therein lies its weakness. You have to want to change; without that, Pavlok isn’t going to be much good to you.

Pavlok will also track your sleep habits, if you want to see how well – or not – you are sleeping.

1 Admission of mistake in Oxford vaccine dose raises doubts over reliability
2 Direct sea routes to Europe offer certainty in choppy Brexit waters
3 There was no vaccine for Anglo: Why the last crisis was different
4 Pandemic brings a halt to Zara-owner’s Irish expansion
5 ‘Make plans but don’t hold on to them too seriously’
Real news has value SUBSCRIBE