State could be Blockchain leader if Government takes initiative - expert

Paul Brody believes the technology will have biggest impact among manufacturers 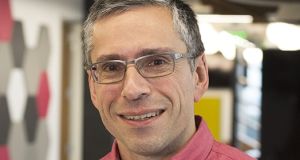 Paul Brody: he says blockchain is perfect for food producers looking to confirm the provenance of their products or to protect against scares

Secure transaction technology blockchain has been hailed as something that will revolutionise financial services, but its biggest impact could be in manufacturing industry, with many of the world’s biggest companies set to introduce it shortly.

That’s according to Paul Brody, who previously led IBM’s attempt to create a blockchain-based architecture for connecting devices in the Internet of Things (IoT) space. He then jumped ship to become global innovation leader for blockchain technology at consulting firm EY two years ago.

Speaking to The Irish Times on a recent visit to Dublin, he also said Ireland could position itself to become a leading centre for blockchain if the Government did more to embrace the technology.

Brody admits to being something of an evangelist for blockchain. While the technology may well lead to widespread transformation of the global banking system, he says it could serve a much wider role, including helping to facilitate trade in a post-Brexit environment.

“Blockchains are the single most secure information technology that has ever been invented. And the pace of innovation in terms of the tech is among the fastest I have seen in my whole career”.

For the uninitiated or for those who only have a dim awareness of it as the technology that underpins cryptocurrencies such as bitcoin, there is a lot of confusion about what exactly blockchain is.

Thankfully, Brody, who may come across as your archetypal techie, but who in fact graduated from Princeton University with a qualification in African Studies, is able to explain the technology relatively succinctly.

If you’re looking for someone who knows about the technology, Brody is your man. After all, as well as formerly leading IBM’s mobile and IoT practice in the US, he has just led a team within EY which has recently finished its 50th paid blockchain engagement.

If anyone can see where interest in blockchain is coming from he can.

“While there is no doubt that banks are investing in the technology, the fastest urge to implement it is coming from industrial companies looking to integrate business operations,” he says.

“At the end of last year and the start of this one is when industrial companies woke up to the value of blockchain. We’ve just been asked by our first couple of early prototyping clients to give them proposals to put the technology into business production. My forecast is that 2018 is the year when the first big companies like Maersk and Walmart will go live with blockchain. From there things will scale pretty quickly across industry.”

While Blockchain may seem revolutionary, Brody insists the actual tech isn’t that astounding.

“The technology itself is very ho-hum. It is essentially transaction processing and the ‘tech’ has been with us for many years. What it does isn’t that amazing, but how it is done is.” says Brody.

“The idea of a distributed ledger is a breakthrough in terms of security. Unlike most traditional methods where the more parties added to a transaction the weaker it gets, blockchain works the other way. Also, the concept of programmable ledgers makes contracts automatic and enforcement of them more rigorous than has ever been made possible.”

According to Brody, what is bad about blockchain is also what makes it magnificent.

“If you were thinking back in the 1960s about designing a transaction processing system then really blockchain is a terrible waste. It burns up bandwidth and computing power because everything gets copied to everyone, but that is also the great thing about it.

“Blockchains don’t offer alternative facts. They are all about establishing shared truths, and that is something which is obviously extremely useful.”

Brody claims there are many ways in which companies in disparate sectors stand to benefit from deploying blockchain. He cites the example of one unnamed company that EY has worked with which believes it can save as much as €1 billion a year due to being able to reduce the admin burden associated with traditional supply chains.

He says that implementing blockchain is no more difficult than introducing systems such as EDI and XML for suppliers. Moreover, as well as benefitting the big players, he believes it could also be a godsend to the smaller guys.

“What often happens in a multi-tier supply chain is that you get a big company such as Microsoft or Unilever at one end and then small suppliers at the other. Usually the big guys might issue payment orders but it can take a long time for the smaller guys to get paid. If a bank is included in a blockchain ecosystem it can see that a PO has been issued and can loan credit against it,” says Brody.

While industrial companies may be in a rush to embrace blockchain, Brody is keen to point out that it has benefits for firms in multiple sectors.

“Any kind of complex multiparty interaction benefits from a blockchain,” he says, noting how the technology is taking off in the health sector with GPS, hospitals and insurers forming networks to obtain medical data, sort out payments and rebates and so on.

He also says blockchain is perfect for food producers looking to confirm the provenance of their products or to protect against scares.

“The thing about blockchains are they are most useful when you are trying to establish certain facts that are shared across multiple parties, and so food supply chains are a great example of how it can work. There are lots of parties, be they producers, distributors and so on, and blockchains can pinpoint what has gone into producing a particular product and where something might have gone wrong. The pharma sector is also keen on the technology for similar reasons.”

Ironically, cryptocurrencies is an area where blockchain may not come into its own, at least in the west anyhow.

“If you live in a mature market and have access to digital banking today you don’t really have a compelling need for bitcoin or its variants, but I can see cryptocurrencies becoming a very important asset in emerging markets,” said Brody.

Having visited Ireland on a number of occasions, Brody believes the country has as much opportunity as anywhere else to become a leading centre for blockchain technology.

“No one has claimed the space yet and become a hub for blockchain, although in Dubai there is a push on which is leading many fintech entrepreneurs to spend a lot of time there.

“Many big transformations come about when state and local government get involved because in doing so they force industry to change as well. I think the Irish Government could send out big signals globally by leading by example with this technology, and choosing to do something massive like move public procurement onto a blockchain.”