‘Star Trek Fleet Command’ is the first AAA game developed in Ireland. It won’t be the last 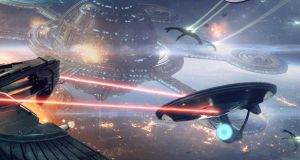 Star Trek Fleet Command: “We tried to stay very true to the brand, but we’ve given them a completely new view on the world fans are used to”

It was a long time coming: three years in development, multiple late nights and negotiations over licences for the content. More significantly, there was the Star Trek fanbase to win over. That was up there with the toughest challenges the company faced, but chief executive of Digit Richard Barnwell thinks the title will do it.

“We tried to stay very true to the brand, but we’ve given them a completely new view on the world fans are used to. Every Star Trek movie, every TV series, it’s always from the view of the federation. You are always captain Kirk, you follow the Starship Enterprise. You never see it from the other point of view,” he explains.

Now, the game is in it for the long haul. Barnwell estimates that there is about five years of content with the game at launch, and the plan is to keep updating it over the months and years that follow. It’s not just about keeping the players happy. Digit currently employs around 70 people, and if the Star Trek title does as well as the company anticipates, it will mean increased support for the title and therefore more jobs in Dublin in the long run.

“We’re in a great position that if this thing works we can hire and hire well. Which we have done consistently for the last few years,” says Barnwell.

Games are big business. With the global games industry set to hit $180 billion by 2021, and a burgeoning mobile games industry providing opportunities for smaller developers, now is the time for Ireland to start boosting its own credentials.

The opportunities for games developers have increased significantly in recent years. Both PlayStation and Xbox have programmes aimed at encouraging independent developers to make games available for the consoles, such as Alienation or Spelunky. Then there’s mobile gaming, which has exploded in recent years as the devices have become more powerful.

For Digit, mobile games made sense. Star Trek Fleet Command is available on mobile platforms only, a decision that was made following the studio’s first release, Kings of the Realm. That title was across all platforms, and Barnwell said it gave them a good view of what worked and what didn’t. Mobile definitely did.

“They’re in people’s pockets, the devices are strong, the engagement times are huge and there are no barriers to transactions,” he says.

The company is focused on strategy games rather than casual, for one good reason: they’re easier to monetise. With a slightly older age profile and an ability to hook players in for the long haul, it’s a better bet for developers than some of the more casual games.

Everyone who plays a game likes to think they know how to to design a game, yet 99 out of 100 haven’t got a clue

“Our goal is to create top-grossing strategy games. It’s that category we need to own and dominate,” he says.

But while the company is obviously concerned with its own success, there is also a larger plan at work: building up Ireland’s games industry.

“What we are trying to bring is knowledge,” says Barnwell. “It’s not just about how to make a game properly, it’s how to monetise your audience successfully. Playing a game is great but that is not knowing how to make a game. Everyone who plays a game likes to think they know how to to design a game, yet I can guarantee you right now that 99 out of 100 haven’t got a clue. The art form behind it is what people don’t understand.”

Digit is aiming to push Ireland’s games industry into overdrive, hoping to replicate some of the success in the UK as smaller studios spun out of bigger projects in a similar way to how the multinationals are feeding into the tech startup industry here.

It is already happening on a smaller scale. Startup studio Vela Games was established by Travis George, Lisa Newon George and Brian Kaiser, veterans of the games industry with stints in Riot and EA under their belts. All three are originally from the US, with George and Kaiser former college-mates. Newon George is an anthropologist by trade, with a Masters and PhD, plus an interest in gaming.

Newon George originally moved to Ireland to take up a role with Riot’s European headquarters. Now she heads up Vela’s player insights.

“I really missed being part of a small team that Riot was back in 2009. I missed building something from the ground up and being close to the action and getting my hands dirty in terms of design and games development,” Newon George says.

When it came to deciding where to locate the studio, Dublin seemed like a good bet: centrally located, English-peaking and with a burgeoning industry.

“Somebody was going to have to move,” explains George.

The move was carefully considered, though, like everything in Vela Games. The company is starting out with a clear plan for the future and a roadmap for where they want to go – a player-focused company. The founders are clear about their reasons for locating in Ireland – and the top one, funnily enough, isn’t tax. It’s that Ireland is actually a good place to live and work.

Things are starting to pick up pace for the trio. Vela has just raised €3 million for its studio, with Dermot Desmond’s IIU backing the firm, and is now in the process of building its team. Eventually, the goal is to have 15 people working at Vela in the next 18 months, creating a working version of the game they are hoping will turn the industry on its head.

The founders have found the experience so far to be positive; they are supportive of the general industry shift to make Ireland friendlier to budding studios. Plus it is still early days; they are currently working through the visa process for their first hire – the same process they have already been through themselves.

“I’ve learned the jargon and the battle-cry,” says George. “We wouldn’t say no to more support.”

It’s a battle-cry that Barry O’Neill is familiar with; he has been banging that particular drum for some time now. The founder of StoryToys – now known as TouchPress following the acquisition of a US company – was also one of the founders of Games Ireland, a lobby group that took on the task of pushing the Government to develop supports for the industry in Ireland. The ultimate aim was to pitch Ireland as a games hub.

The group has been disbanded, but the work behind the scenes continues, and another group, Imirt, has taken up some of the mantle. It’s a slow process. In 2015, O’Neill warned that Ireland was falling behind the UK as a good place to create games as the British government implemented a tax credit system aimed at fostering the industry’s growth. The industry has grown considerably since then but Ireland hasn’t followed suit.

“Is the climate any different now? I’d say it’s not. One thing we have seen over the period since we put Games Ireland on ice due to lack of progress is the tremendous results in the UK from their games tax credit,” says O’Neill. “Really, that’s what we were looking for. It’s BFI-administered, very quick to process, providing UK developers with effectively a 20 per cent uplift in terms of their development costs and it is processed fast – within three to four weeks of a claim. The Government here claimed the R&D tax credit was enough, but it doesn’t cover content creation.”

There are some funding options for Irish-based developers. There is the Creative Europe fund, which has awarded Irish games companies more than €830,000 in funding since 2013. The last round saw Gambrinous, Isometric Dreams and Simteractive pick up almost €400,000 between them, and another round is set to close in the coming weeks.

Another route is seed capital funds and the competitive start fund, but a dearth of game-specific funds can hinder small firms trying to get off the ground.

It’s not just about the funding, though. O’Neill explains the red tape involved in getting people into the country can also be a drag on businesses.

It’s not that the skillset isn’t here, or the knowledge or the passion. It’s just no one has ever experienced it before

“It can take weeks, and that’s fast-tracked,” he says. But with a lack of senior-level talent in Ireland at the moment, companies have no choice. That is a reality for the industry as a whole. Digit’s Barnwell says the company has a 60/40 split in favour of Irish workers.

“We discovered very early on that we couldn’t get the people we need in certain areas. So we took a scientific approach. We hired some senior people from outside the country for certain skillsets, we try to hire locally and train them up where possible,” he says. “The raw talent is absolutely here, it’s just exposure to the industry isn’t. It’s not that the skillset isn’t here, or the knowledge or the passion. It’s just no one has ever experienced it before. Who else do people work for? Middleware isn’t the same, it’s not a creative function.”

In the background are groups such as Imirt, helping developers to apply for European funding to fuel their ambitions. For now, the industry will keep plugging away, growing quietly as more companies spring up and wait for the moment of critical mass to hit.

“I’d love to think that in five to 10 years time that we triggered that,” says Barnwell. “And the way to do that is to be so successful that we can spawn it.”