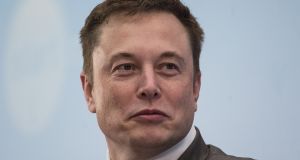 Elon Musk was fined by the SEC in 2018. Why? Photograph: Justin Chin/Bloomberg

1. What was the name of the Microsoft cofounder who died in October 2018?

2. On January 8th, Oath will officially change its name. What will it be known as?

3. In March, it was revealed Facebook may have improperly shared the personal data of 87 million users. What was the consulting firm at the heart of the scandal?

4. What is the name of the video game that spawned the craze for the floss?

5. Google unveiled a new conversational AI this year that was so lifelike it could fool people over the phone. What was it called?

6. Which tech giant briefly overtook Apple in November to become the most valuable US public company?

7. What was the name of the SpaceX rocket that sent a Tesla into space in February?

8. When is Sony set to finish manufacturing physical games for its Playstation Vita system?

9. What was the name of the Walking Dead and Stranger Things games studio that announced in September it was shutting down?

10. What multinational tech giant announced in June it would create 1,000 jobs in Ireland over the next two years?

11. Where is Facebook Ireland set to make its new home in Dublin?

12. What was the top-trending Google search in Ireland in 2018, according to Google’s “Year in Search”?

13. How much did Waterford-based company Immersive VR raise when it listed on the stock exchange earlier this year?

14. Which two US locations did Amazon choose for its new bases?

15. How much was Google fined in July by European competition regulators over the abuse of Android’s dominant position in the mobile market?

17. What sparked the #GoogleWalkout in November?

18. What company did SAP announce in November it would pay $8 billion to acquire?

19. Which insurance firm began offering motorists discounts on their premiums if they installed a dashcam in their car?

20. What is the name of the consortium that is the sole remaining bidder for the National Broadband Plan?

This year the winner will receive a Nokia 5.1 Android phone, courtesy of Nokia.

The runner-up will receive a Sprocket New Edition gift pack courtesy of HP.

Entries should be sent by email to techquiz@irishtimes.com.

Entries must be received by the close of business on January 2nd, 2019.

The winner will be announced the following week. The judge’s decision is final.