When it comes to innovation, the numbers add up for Sage 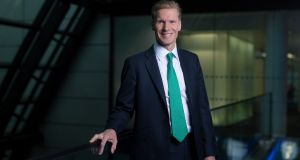 It may be the largest software firm in the UK and the second biggest in Europe, but Sage isn’t necessarily a name that immediately springs to mind when people talk about innovation.

The London-listed company, which is in the process of increasing its Irish workforce to 600 people, is still seen, primarily, as a firm that provides accounting and payroll software for SMEs. This isn’t particularly surprising given it processes more than a billion payslips every year and is the software package used by more than half of all businesses in Ireland and the UK.

In recent years, however, the company has expanded way beyond its initial niche to cover pretty much everything growing businesses could need or want, from human resources and enterprise resource planning, to customer relationship management.

But as chief executive Stephen Kelly is the first to admit, there still seems to be plenty of people who haven’t heard Sage has been busy evolving.

“I suppose it is inevitable that any company is judged a little bit more on the past than the future,” he says.

Kelly, a tech veteran who has an impressive track record in turning businesses around, is on a mission to ensure that soon everyone will know Sage as more than just the saviour of bean counters.

“Sage’s declared intent is to be the company that exploits embedded technologies like artificial intelligence (AI) and machine learning to make our solutions deliver for entrepreneurs in an invisible way,” he says.

It is a lofty ambition for sure. But if anyone can persuade the world to sit up and pay attention to what Sage is selling then it should be Kelly.

The English man first came to prominence at Oracle, where he spent nine years in a variety of executive roles. From here, he ended up in Silicon Valley running Chordiant Software, an enterprise software company that he took public in 2000.

“We went from nowhere to listing on the Nasdaq within four years and enjoyed wild success as we got up to $100 million from zero,” says Kelly of his time with the company. But Chordiant like other tech firms later took a drubbing when the dotcom bubble burst.

In 2006, he surprised many by returning to Britain to rescue Micro Focus shortly after it had returned to markets in what was largely saw as an ill-advised move. While at the helm he helped the company to increase revenues sevenfold within three years.

Indeed, Kelly was seen as being so critical to the company’s success that when he announced his departure just weeks after overseeing the acquisition of two rivals, Micro Focus shares fell 14 per cent, wiping £94 million off the company’s market valuation.

Having departed Micro Focus, Kelly’s next move was an even more radical. He ended up being appointed as chief operating officer of the UK government under David Cameron. In this role he was the most senior executive responsible for its efficiency and reform programme in the digital, commercial, IT and small business communities.

While many saw it as a poisoned chalice, Kelly considered it an opportunity to make real changes. His spell was not without controversy, but he was also widely praised for opening up the procurement process to smaller companies and achieving £50 billion in efficiency savings through a series of digital transformation projects.

Sage move And so to Sage. Eyebrows were raised once again when Kelly was named chief executive of the company in 2014. While one of the fastest-growing firms in Europe in the 1990s, the company had increasingly come under pressure in recent years from leaner cloud-based rivals such as Salesforce and Netsuite.

Kelly was brought in to lead a transformation from up-front software licensing sales to a recurring revenue model. The change is not complete, but Kelly is happy to reel off some of the results so far which include the launch of Sage Business Cloud, its unified cloud-based platform in early 2017.

“I think we’ve more to do on innovation and technology but we are getting there. The launch of Sage Business Cloud in itself immediately made us one of the top 20 cloud companies in the world and in the last financial year alone, that business grew by about 83 per cent, which is spectacular growth,” says Kelly.

“We’ve also transformed from 18-month release cycles for our enterprise management products down to as little as one month for desktop versions and every two weeks for mobile,” he adds.

The company announced in October that annual turnover had beaten management targets with organic revenues by 6.6 per cent to £1.7 billion in the year to September 30th. It also signalled its intent to buy more businesses to encourage further growth, having acquired a number of companies recently, including Fairsale and Intacct.

“A lot of innovation is driven from here,” says Kelly, adding that the company’s decision to choose Dublin for its European base ahead of more than 10 other European cities had already been validated.

“Dublin won out over a lot of cheaper locations because it has so many positives in terms of skills, its digital infrastructure and multilingual workforce. Ultimately it was a very long-term decision and a big commitment from us,” he says.

Having successfully migrated most customers to the cloud, Kelly is keen for Sage to introduce newer technologies to help further ease the administrative burden while also helping the company to stay ahead of its rivals.

Studies conducted by Sage indicate 120 days a year on average are lost to small business in terms of administration. Kelly says the company he leads is betting heavily on technologies such as AI to enable customers to focus less on dreary duties such as invoicing.

“There is a huge productivity gap that can be exploited through innovation and technology,” he says.

Will embracing AI and machine learning really help the company become the leaders in innovation? Kelly certainly thinks so.

“I think we will come to be known as the company that actually delivered on the promise of invisible administration, and in doing so gave a massive productivity boost to the economy”, he says.