Data centre investment in Ireland to near €9bn by 2021

But sustainability of industry growth will depend on energy resources 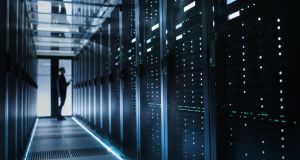 Report does not include the potential investment by Apple in Athenry, which was delayed by objections to the plan. Photograph: iStock

Investment in the construction of data centres in Ireland will reach more than €9 billion by 2021, a new report has estimated, with annual investment expected to exceed €1 billion over the next four years.

The report, which was produced by Host in Ireland in association with Bitpower, said the €1.1 billion invested in 2018 would bring total cumulative investment to €5.7 billion by the end of the year.

However, the long-term sustainability of the industry would depend on the availability of energy options, the report said.

There are 46 data centres in Ireland, with the largest cluster southwest of Dublin, where Amazon and Microsoft among others have set up their facilities. Data centres accounted for an estimated 5.5 per cent of the State’s power requirements at 1.56 TWh in 2017, assuming a power utilisation factor of 42.5 per cent across the industry. Their full capacity in the first quarter of 2018 was 480 MW, with that figure set to grow to over 1200 MW by 2024.

However, the report noted the actual energy demand is lower in practice, influenced by data demand, outside temperatures and more.

The report does not include the potential investment by Apple in Athenry, which was delayed by objections to the plan.

Garry Connolly, president of Host in Ireland, said the first quarter of the year had seen the expansion of the hosting market in Ireland, with new projects and expansions announced in Dublin and Cork.

“We continue to see strong growth with the granting of planning and new planning applications for in particular the metro Dublin area. While the start of the year has been very positive for the market and €1 billion is anticipated to be spent in 2018, the medium/longer term sustained growth of the industry will still depend on the availability of energy/energy options in the Dublin metro.”

The report was published to coincide with the Second Data Symposium, which was held at Dublin City University, which brought together data experts from across Ireland to discuss th industry and the challenges it faces in Ireland.

Among the speakers were Interxion’s Tanya Duncan, David McAuley of Bitpower and Alec Leckey from Intel.