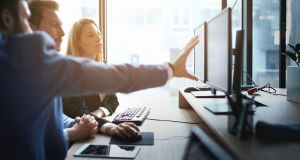 Ireland comes in fourth place behind Israel, the US and Sweden in terms of capital invested per capita in technology in Atomico research. Photograph: Getty Images

Ireland has the fastest growing IT worker population in Europe, but the United Kingdom remains the leading destination for tech talent despite Brexit, a new report shows.

The study also ranks Ireland in fourth spot behind Israel, the United States and Sweden in terms of capital invested per capita in technology. However, Ireland comes in ninth place in terms of destinations for capital invested in Europe, according to The State of European Tech report from venture capital Atomico, which was launched at the Slush conference in Helsinki on Thursday.

The report, which compiled responses from more than 3,500 tech professionals, including 1,000 company founders, reveals that a record amount is being invested in European tech firms.

The study shows that $19 billion (€15.98 billion) has been put into tech start-ups collectively this year, compared to just $14.5 billion (€12.19 billion) in 2016. The average deal size has also increased compared to the record-breaking amount recorded last year.

Seven European firms founded since 2003 became “unicorns” this year, to bring the total number of start-ups worth a billion dollars or more to 41.

“This year’s findings reveal the state of European tech in 2017 is the strongest it has ever been. Europe is building a tech ecosystem in its own image, defined by deep tech expertise, incredible geographic diversification, and a uniquely collaborative approach with traditional industry,” said Atomic partner and head of research Tom Wehmeier.

“The solid foundations that have been laid – a huge and deep talent pool, founders with global ambition levels, and a large, growing and increasingly sophisticated investor base – means that Europe marches to its own beat,” he added.

Mr Wehmeir forecast that the next industry-defining company may well come from Europe, adding that the question of whether the continent can produce a $100 billion (€84.1 billion) company has been put to bed with both the Dutch company Picnic and Spain’s Cabify raising sums in or around that sum.

Moreover, the number of corporate investors in start-ups has risen 600 per cent since 2012.

Details of the study were revealed at the Slush conference, which has attracted an audience of close to 20,000 this year.

Former US vice president Al Gore, who gave the keynote speech at Slush on Thursday told delegates that investing in business and entrepreneurship “plays a key role in solving the climate crisis”.

“We face an existential threat to the future of civilisation,” he told attendees.

Claiming he was on a mission to recruit tech entrepreneurs to fight climate change, Mr Gore said: “If companies want to attract top talent and collaborate with start-ups, they have to show a greater mission of making the world a better place.”

5 When will we travel again? Nobody knows