Throw your phone in the air like you don’t care 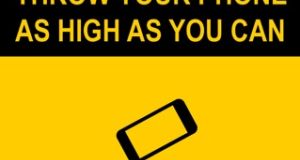 This may be the last app you’ll ever need to install on your smartphone. The reason being that using the app will probably result in a shattered, broken phone. Yes, SMTH (Send Me To Heaven) is a game that encourages you to throw your phone skywards with the goal of getting it as high as possible.

This app has been around since 2013 and somehow is not only still in the Google Play app store but also enjoying a resurgence (it is currently trending). There is even a global top 10 scoreboard; some crazies have thrown their phones more than 40m into the air.

Here’s the thing, though: Norway-based developer Petr Svarovsky’s ultimate goal was getting SMTH into the Apple App Store but it was banned due to “encouraging behaviour that could result in damage to the user’s device”. This has obviously disappointed the anarchic app developer who told Wired back in 2013 that “the original idea was to have very expensive gadgets, which people in certain societies buy just to show off, and to get them to throw it”.