Weblog: The fifth-richest man in the world is working through his bucket list 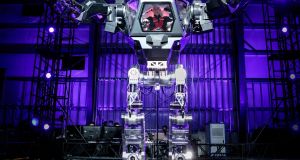 Bezos bestie: the robot from Hankook Mirae Technology he piloted at MARS 2017.

Amazon chief executive Jeff Bezos has revealed the final part of his plan to take over the world: from inside a giant robot that resembles the Caterpillar P-5000 Work Loader as operated by Sigourney Weaver’s Ripley in Aliens. Okay, we’re kidding, he’s not really trying to take over the world; he was just excited to play with an impressive robot from South Korean company Hankook Mirae Technology while attending MARS 2017.

Bezos is the fifth-wealthiest person in the world, chief executive of one of the world’s the biggest online retail platform, owner of the Washington Post and founder of private aerospace company Blue Origin. And now he’s had a chance to pilot the super-impressive Method-2 robot. That’s his bucket list, then.

1 Fianna Fáil may have just pressed the pause button on the property market
2 Who are Ireland’s 17 billionaires?
3 My father in a nursing home wants to gift me his house
4 Are there annual limits on inheritances or gifts to a child?
5 European investor acquires Harcourt Road offices for €55m
Real news has value SUBSCRIBE