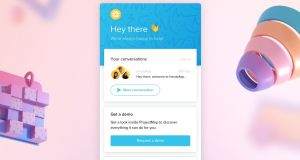 The new Intercom Messenger will offer 12 apps at launch that customers can integrate.

Irish-founded tech firm Intercom is aiming to change its Messenger applications for use in business, with a new system that will allow firms to add apps that help deal with customers’ needs.

The new Messenger will offer 12 apps at launch that customers can integrate, including the ability to request a demo or meeting, check an order status or complete a sign-up without leaving the messenger.

The library of apps includes Google, Shopify, Stripe, Product Hunt, Atlassian and Aircall. Customers can also build their own apps for use.

Intercom, which offers a platform for internet businesses that allows them to communicate with customers through their own websites or mobile apps, was founded by Eoghan McCabe, Des Traynor, Ciarán Lee and David Barrett in 2011.

He said business messengers had been about chat, and focused on bringing the power and flexibility of personal messengers to businesses.

“This really feels like an inflection point. With previous versions we released they felt more iterative. This time we think we’re taking a significant step away from what we’ve previously done,” said Mr Donohue.

Among the new features is a new messenger home screen, a place where users are greeted with not just lists of conversations, but with a list of apps that can get things done. Apps can now work inside Intercom’s Messenger, inside the home screen and also inside conversations. It will also work with mobile web and native mobile apps.

“This is about being able to get things done,” Mr Donohue said. “It’s no longer just about chat.”

Companies will be able to build their own apps for their own use, or feed into the app store for others to use.

He said Intercom’s research had found about one in seven conversations on its platform had a link to do something somewhere else. The addition of the apps would bring more convenience to customers if they could keep everything inside the messenger.

“We hope this will be huge. We think this is a place where business messengers, rather than just following the lead of consumers’ messaging apps, are maturing and figuring out what works really well in their space,” Mr Donohue said.