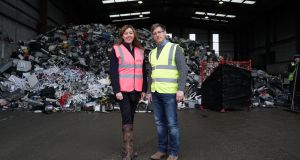 In a warehouse in the midlands, nestled among green fields and trees, there is a giant pile of old vacuum cleaners, radios, heaters and fans in the centre of the floor.

It’s a bit of a trip down an electronic memory lane. An old Henry Hoover sits alongside a CRT monitor; a child’s plastic guitar nestles against an old office printer. On a nearby pallet is a pile of old PCs; towards the back of the room sit a number of old oil-filled radiators.

The pile represents about a week’s worth of collections, which is somewhat of a shock.

However, among that pile of broken plastic and twisted metal there is money to be made. KMK Metals Recycling is one of the companies that WEEE Ireland tasks with recovering recyclable material from Ireland’s electronic waste. It goes something like this. You bring your electrical waste to a WEEE [waste electrical and electronic equipment] drop-off point, and at some point it ends up here – or somewhere very like it. When you tire of your TV, or buy a new fridge and send the old one off for recycling, your discarded products make their way to a hub just like this one.

Batteries are removed, the waste is separated, put through several processes to break it into larger parts, including a spin in what KMK’s commercial manager, Kai Meyer, refers to as the “smasher”.

The facility handles 30,000 tonnes a year on site, separating it into the piles that can be recycled, the material that needs to go elsewhere and the bits that are not worth much of anything to anyone.

The issue of plastic waste has become a hot topic in recent months, with the refusal by China to take any more foreign waste causing a rethink about what we do with our rubbish.

But one thing we aren’t talking too much about is our electronic waste.

It’s something to which we should be paying more attention. It’s the fastest-growing waste stream, and when you consider what it includes, it’s not difficult to see why. Smartphone, tablets, laptops all contribute, as do the growing number of Internet of Things devices, with everything from lightbulbs to door locks having sensors and electronics put inside to make them connect to the internet.

Figures from Greenpeace estimate that more than seven billion smartphones have been produced since 2007, and the average phone is used for only two years. According to the United Nation, almost 45 million metric tonnes of e-waste were generated in 2016, and only 20 per cent of that was recycled.

There are plenty of reasons why you should make the effort to get your old tech to a recycling point. If you throw your old phone into the bin, it may end up in landfill,where it may leach toxic metals into the soil. The metals inside phones are valuable too, with gold and cobalt used in the making of phones and tablets.

At Mobile World Congress this year, the problem was highlighted when environmental activists staged a protest outside the exhibition. The European Environmental Bureau’s waste policy officer Piotr Barczak spoke of the “dirty side” to our tech obsession: “Trainloads of e-waste trundling out of our cities and towards hellish waste dumps in Africa and Asia. ”

That is a notion that WEEE Ireland’s Elizabeth O’Reilly is keen to dispel. Ireland’s waste isn’t bundled off to be recycled in far-off countries.

“We’re still trying to impress upon people: your recycling happens right here in Tullamore, ” she said.

Ireland has a good rate of recovery on electronic waste. Back in 2005, the Waste Electrical and Electronic Equipment system was was introduced, with a range of charges included for the recycling of everything from lightbulbs and toasters to washing machines.

It was designed to be “polluter pays”, with those charges funding the recycling effort. Retailers passed on the charges to consumers, itemised on their bills every time they bought anything from a battery to a fridge. If it has a battery or a plug, it has to be sent to WEEE recycling when it has reached its end of life, instead of landfill.

These days, you no longer see that charge on your receipt, but it is built into the prices charged by manufacturers and retailers. The Republic had a 66 per cent collection rate for electronic waste in 2017, beating its target of 65 per cent by 2019. “Ireland is a success story,” said Meyer.

We may be good at collecting it, but we are also good at generating it. The evidence of our consumer culture can be seen on the conveyor belts of KMK Metals. An old Sky remote control, a pair of broken Beats headphones, a plate from a steam iron. Meyer picks up a ridged lump of metal. It looks vaguely familiar, but it’s not quite recognisable. “These are the best items to find – a George Foreman grill,” he said. “This is two lumps of aluminium.”

Those cheap headphones you bought that broke after a week will end up in a facility such as this eventually. Meyer picks up another smashed unrecognisable electronic item. “Cheap to buy, cheap to dispose,” he says.

It’s at this point, after the items have been through some sorting already, that a line of workers will pick out things that have been missed, such as power cables that have made it through the process.

Eventually, with as much metal as possible removed from the pile, it is separated into metals, plastics and bits that can’t be separated further. It is then sent off to different plants in the UK and continental Europe, mostly in the Benelux region.

At the last count, there was still more than 30 per cent of electronic waste still missing in action, whether that means it goes to landfill or moulders away in an attic or shed, waiting for someone to finally give up and send it for recycling.

To those who say that one person’s actions can’t make much of a difference, WEEE Ireland answers: small things matter. The biggest problem? Getting people to realise that the “just one” battery or item they are binning instead of recycling is part of a wider problem. It all adds up.

“People are more environmentally concerned, but we are still climbing an education mountain,” said O’Sullivan.

“There is an increasing trend towards consumerism and consumption in the market,” she said. “We have to work harder than ever.”

It is hard to see where all this will end. As we continue to build technology into our lives, the e-waste mountain is piling up. With every new phone release and accompanying hype, comes the inevitable discarding of another phone somewhere down the line.

And while we may have a good rate of collection, we could still be better. In fact, it’s how we collect it that could be improved, Voice Ireland’s Mindy O’Brien said. The environmental group is advocating, among other things, a lower rate of VAT for recycled plastic products, the return of repair culture, and a deposit scheme for electrical items. “If you have a TV and you’ve paid a deposit, you would be more likely to bring it back,” she said.

She advocates the adoption of different consumer models too. Instead of buying something new, items can be leased, like people did decades ago. When they are returned because the consumer wants to upgrade to a newer model, they can be refurbished or used for parts to repair other items. The manufacturer has a single stream of waste to deal with, and it’s all its own products.

In fact, an overhaul of the entire process would probably be of more benefit. O’Brien points to a movement in the EU for eco design: if you make something, you make it easily repairable with no built-in obsolescence.

“It’s cradle to cradle instead of cradle to grave,” she said.

But there is still going to be the mentality to get things new, she acknowledged. We need to ask ourselves some serious questions about our consumption habits. It’s often cheaper to buy something new than to repair a broken item, and that is something that needs to change, said O’Brien.

If we don’t change something, we may find ourselves marching towards the UN estimates of 52 million metric tonnes of e-waste by 2021, and the accompanying environmental impacts of satisfying our appetite for the latest and greatest gadgets.