No bells or whistles, but the Minirig Mini punches above its weight as a speaker 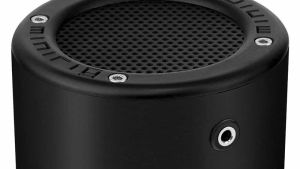 The battery will last for an average of around 10 hours, depending on how loud you like to push things.

The small speaker is puck shaped, and a little taller than the Amazon Echo Dot. It’s a simple design – one button for power and gain settings with an LED indicator that reflects battery levels among other things, a grille on top and two 3.5mm jacks on the side of the anodised aluminium body. You can get it in a range of colours, but there is no unnecessary design flair. On one hand, it’s a bit sparse, but on the other, it gets the job done. There are no unnecessary bells or whistles to contend with. The Minirig Mini is what it is, and it’s not apologising for it either.

And it doesn’t need to. The Minirig Mini is only mini in looks and name. Given its small size, the sound it produces seems disproportionate. It fits in the palm of your hand, but it sounds like it should be a much bigger device.

There are 15 watts of power lurking under the hood, with a 52mm driver.The battery will last for an average of around 10 hours, depending on how loud you like to push things. Stick it at low volume, and you can eke out 30 hours or so; push it to its limit and you’ll top out at three hours.

The two jacks serve a purpose. One is for low gain, the other for high, allowing you to attach a subwoofer, and both can be used for input if you have a player that isn’t Bluetooth enabled. If you aren’t really up on your audio terms, what it means is you can hook these speakers up to a range of different audio sources and improve the quality even more.

Punches above its weight

But as a Bluetooth speaker, the Mini punches above its weight (incidentally, that is 314g). It uses the AptX codec, which has improved the sound quality of Bluetooth audio devices over the years. While you are using it over Bluetooth, you can also connect another Minirig speaker or subwoofer to boost the sound. You can also connect two Minirig Minis together with a 3.5mm cable to get stereo sound, or pair them wirelessly.

Regardless of your choice – wired or wireless – the speaker performs well. The sound is rich, it doesn’t feel tinny or missing something, as other speakers can.

The other good news? You don’t have to mess around trying to figure out how to put the speaker into pairing mode to connect it to your phone or tablet. As long as two devices are not connected to the Minirig Mini – its limit – the speaker is in pairing mode.

One thing Minirig doesn’t include is a speakerphone, which has become standard for devices that hook up to mobile phones. If you want a multitasking speaker, you’ll have to look elsewhere. Personally, I don’t feel it loses anything for the omission. In fact, I prefer to keep the two separate these days. Private calls should remain private.

The high point of the Minirig Mini is undoubtedly the sound, as it should be. Strip back everything – the app, the Bluetooth connectivity - and it’s still a great speaker. Take its size into account and it’s even more impressive. Second to that is the look. The Minirig Mini is a bit bigger than a hockey puck but it feels solid.

It’s not a standard USB connection to charge. That means finding a replacement cable will be a bit of a pain if you don’t keep a close eye on it. There are no volume controls on the speaker, so if you want to change it up or down, you need to use the source – your phone, for example – or the accompanying app. Unfortunately, that app only works with Android for now, although iOS is coming.

It is splash resistant but not waterproof, so be careful where you bring it. Outdoors in Irish weather? Yes. Poolside? Maybe not.

The verdict: Small in size but not in sound. Worth every penny of its price.