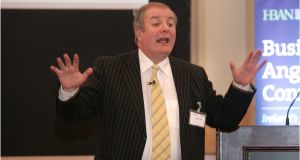 Dragons’ Den mentor Gavin Duffy has repeated his concern about the use of his image in fraudulent advertisements for a crypto currency.

He echoed complaints made by British consumer campaigner Martin Lewis who today launched High Court proceedings in the UK in a bid to sue Facebook for defamation.

The MoneySavingExpert founder says at least 50 fake ads bearing his name have appeared on the social media platform, causing reputational damage to him.

Many of the adverts showed his face alongside endorsements that he had not actually made, and linked to articles carrying false information.

Mr Duffy told RTE’s News at One that he experienced the same problem some weeks ago when his image was used in an advertisement for a scheme called Bitcoin Trader.

The site featured a paid for advert on the BBC news website and also appeared on the Guardian’s website. The advertisement contained a report about Bitcoin Trader being featured on a fake episode of the Australian version of Dragon’s Den, but used pictures and fraudulent testimonials from Mr Duffy and other members of the Irish Dragons’ Den television programme.

He said that when he first saw the advert he laughed. “It seemed so silly. I was concerned that if I commented it would give fuel to the fire.

“I issued a statement eventually as I was concerned that people would be taken in by it and lose money.”

He had contacted both the BBC and the Guardian and the adverts had been taken down, but it had taken some time.

Martin Lewis,is seeking exemplary damages in the UK high court, arguing that Facebook failed to prevent or swiftly remove false advertising that has both tarnished his reputation and lured unwitting victims into costly scams.

Mr Lewis said he would not profit from any damages won, which he would donate to charities combating fraud, but that he hoped the action would prompt the site to stamp out scam adverts. The TV presenter, who founded the consumer site MoneySavingExpert.com , said vulnerable people were targeted with adverts for “get rich quick” schemes with titles such as Bitcoin Code or Cloud Trader that were operating as fronts for binary trading firms based outside the EU.

On one occasion, Mr Lewis said, a woman had spent £100,000 in “a binary trading nightmare” that had attached his name to its advertising. The woman was eventually able to recover her money, as she had paid by card.

Mr Lewis said: “I get about five messages a day from people saying, ‘I’ve just seen your Bitcoin ad and wanted to check it.’ If that is the number who get through to me, how many more must be just taken in?”

He said Facebook had failed to stop the adverts despite his complaints and action. “It is consistent, it is repeated. Other companies such as Outbrain who have run these adverts have taken them down. What is particularly pernicious about Facebook is that it says the onus is on me, so I have spent time and effort and stress repeatedly to have them taken down.

“It is facilitating scams on a constant basis in a morally repugnant way. If Mark Zuckerburg wants to be the champion of moral causes, then he needs to stop its company doing this.”

He said Advertising Standards Authority rulings against the advertisers had little effect. “Criminal scammers from outside the EU are not really interested in the ASA. These adverts are in a lacuna of regulation. No newspaper would have run these adverts, and certainly not over 50 times.” A defamation case against Facebook will have to establish that the UK has jurisdiction and that the company is the publisher.

Mark Lewis of Seddons, the firm of solicitors leading the action, said: “Facebook is not above the law. It cannot hide outside the UK and think that it is untouchable. Exemplary damages are being sought. This means we will ask the court to ensure they are substantial enough that Facebook can’t simply see paying out damages as just the ‘cost of business’ and carry on regardless.”

Martin Lewis said he hoped the court action would be of benefit “partially as a bit of publicity stunt” whether he won or lost. “I want to get the message out. ‘These ads are fake, don’t trust them’,” he said.

Facebook said: “We do not allow adverts which are misleading or false on Facebook and have explained to Martin Lewis that he should report any adverts that infringe his rights and they will be removed.

“We are in direct contact with his team, offering to help and promptly investigating their requests, and only last week confirmed that several adverts and accounts that violated our advertising policies had been taken down.”