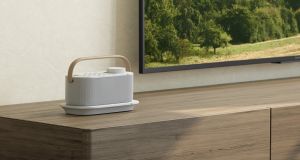 €189
Portable speakers may be commonplace for music, but what about for TV? Sony has just unveiled a new speaker that connects to your TV and allows you to bring the audio with you around the house.

The SRS-LSR200 has three integrated speakers for clear, natural sound, and technology built in to make dialogue clearer and easier to hear. It’s also handy for those times when the TV audio is difficult to hear, but you don’t want to turn the sound up to ear-splitting levels.

The SRS-LSR200 will be available from July in the UK, Germany, Austria and Switzerland and, from September, throughout Sony’s other European markets – including, we assume, Ireland. sony.ie

1 ‘Saudi Arabia is where the opportunities will happen in future’
2 MSD buys Takeda biologics plant in Dunboyne
3 Data centres will force State to choose between climate and investment
4 Trump’s TikTok move may have far-reaching consequences
5 Scars from the crash give Irish banks 2.6 billion reasons for Covid caution
Real news has value SUBSCRIBE