ICT spending growth at risk due to coronavirus

Forecast suggests tech spending should rise to $5.2tn depending on impact of virus 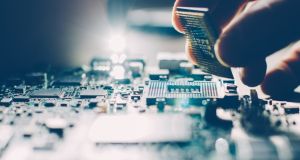 Excluding smartphones, IT spending will dip from 7 per cent growth in 2019 to 4 per cent this year. Photograph: iStock

Worldwide spending on ICT is expected to rise by 6 per cent this year to $5.2 trillion (€4.76 trillion) although disruption to supply chains due to the coronavirus could hurt growth, IDC has said.

Its forecast comes as other research firms also warned of disruption due to the coronavirus and as Mobile World Congress (MWC) cancelled the annual gathering over concerns the virus may spread further.

IDC said IT spending is set to rebound in 2020 as software and services investment remains stable while smartphone sales recover on the back of a 5G-driven upgrade cycle in the second half of the year.

Excluding smartphones however, IT spending will dip from 7 per cent growth in 2019 to 4 per cent this year. Software sales are forecast to slip from last year’s 10 per cent rise to less than 9 per cent, while and IT services growth will decline to 3 per cent from 4 per cent.

Most of the slowdown though will be linked to the PC market where the end of the recent buying cycle that was partly driven by Windows 10 upgrades, will see sales decline by 6 per cent this year compared to a 7 per cent rise in spending in 2019.

“Much of this year’s growth is dependent on a positive smartphone cycle as the year progresses, but this is under threat from disruption caused by the coronavirus crisis,” said Stephen Minton, programme vice-president in IDC’s customer insights and analysis group.

“Our current forecast is for broadly stable tech spending in 2020, but PC sales will be way down on last year, while server/storage investments will not recover to the levels of growth seen in 2018 when hyperscale service providers were deploying new data centres at an aggressive pace,” he added.

China was forecast to post IT spending growth of 12 per cent this year, up from 4 per cent in 2019, but the impact of the coronavirus, which began in the Hubei province, looks likely to inhibit this growth, IDC said.

Canalys this week also warned that the coronavirus will likely upset sales in China’s smart device market, leading it to dramatically revise its forecasts. The research firm, which previously predicted a 7 per cent decline in smartphone sales and an 8 per cent drop for PCs, is now forecasting a 40 to 50 per cent fall and a 20 per cent dip respectively.