Staff at Indeed to return to work after coronavirus all-clear 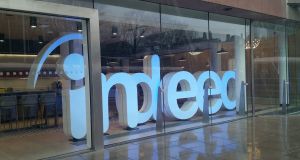 The Indeed offices in Dublin which were closed over fears of potential exposure to the coronavirus. Photograph: Aisling Ennis / PA Wire

The more than 1,000 Irish employees of online recruiter Indeed are free to return to work after a colleague suspected of having been exposed to the coronavirus tested negative.

The company on Monday asked its entire staff in Dublin, Sydney and Singapore, to work from home this week over concerns that an employee at its Singapore office, who recently visited Ireland, had come into contact with someone with the virus.

Indeed said it was “acting out of an abundance of caution” in doing so, amid concerns the individual may have been exposed after family members visited a facility caring for a coronavirus patient.

It said on Tuesday that it had learned that both the employee and other family members had tested negative for the virus after undergoing tests.

“With today’s news, we anticipate all employees who have been working from home will return to their offices early next week. We would like to thank them for their co-operation, patience and understanding as this situation evolved,” a spokeswoman said.

It is understood that EY had also asked staff in Dublin who had been working on Indeed’s audit to work from home for a couple of days as a precautionary measure, while the accounting firm awaits an update from Indeed.

Dublin is Indeed’s second-largest global location with two offices in the city.

The company opened its first office in Ireland in March 2012 with, according to chief executive Chris Hyams, “three people and a pot plant”. Last April it announced plans to create an additional 600 jobs in Dublin over the next few years to bring overall headcount to 1,600 people.

More than 40,000 people have been diagnosed with the coronavirus since it was first detected and over 1,000 deaths have been reported.